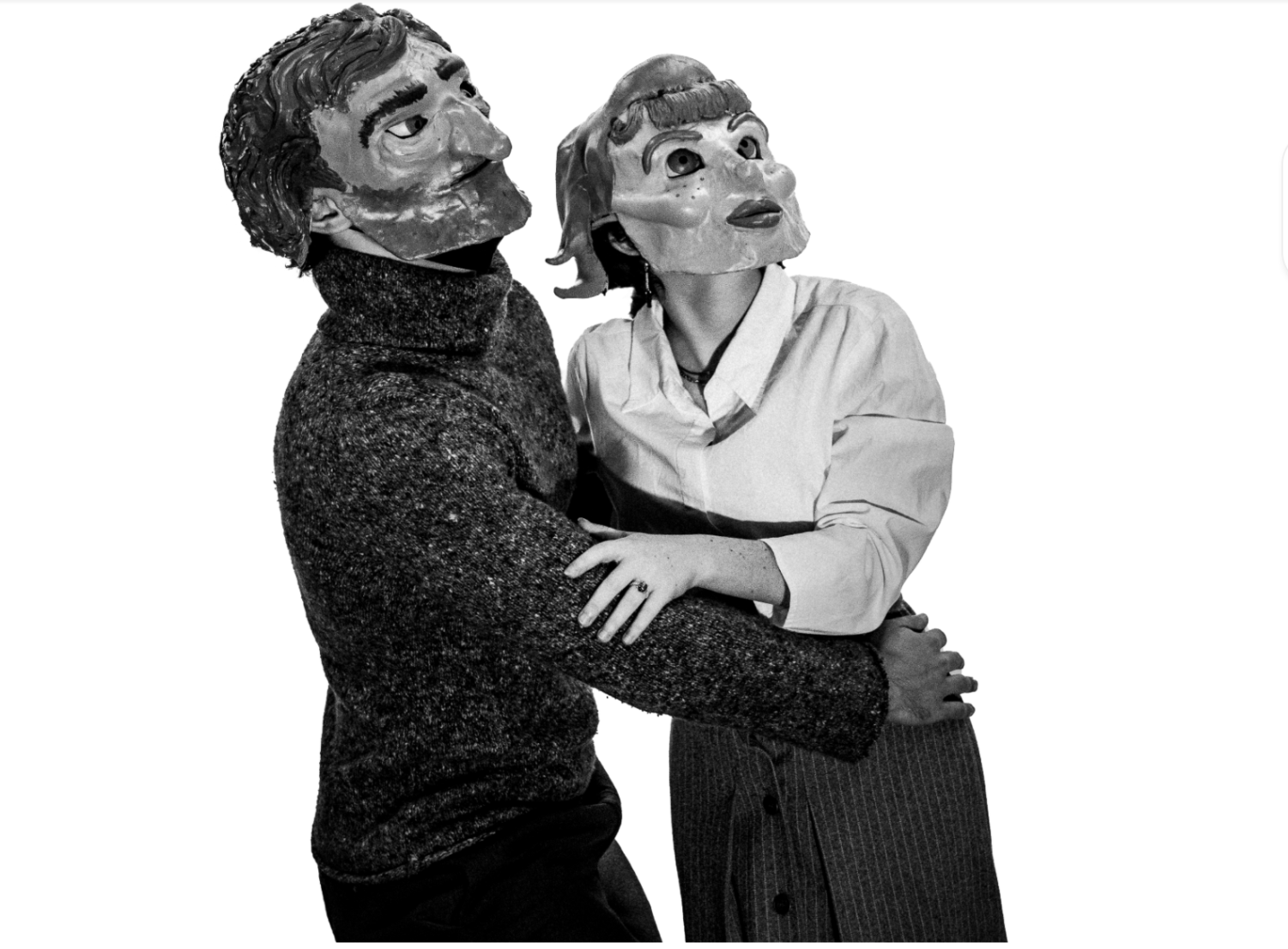 SENIOR Owen Cummings and Adeleigh Karoutchi, ’23, get in character for a photoshoot to help with promoting Rhinoceroses. Cummings, playing Berenger, and Karoutchi, playing Daisy, gave students and staff a preview of their absurdists masks and a sneak peak of the anticipated black-and-white production. (Photo Courtesy of: Mikki Schaffner)

SENIOR Owen Cummings and Adeleigh Karoutchi, ’23, get in character for a photoshoot to help with promoting Rhinoceroses. Cummings, playing Berenger, and Karoutchi, playing Daisy, gave students and staff a preview of their absurdists masks and a sneak peak of the anticipated black-and-white production.

Eugene Lonesco’s quasi-allegorical piece Rhinoceros, written in 1959, focuses on the absurd and grotesque perspective of humanity by portraying a town in France being tormented by rhinoceroses.

WHHS’ theatre program is taking on this post-war avant-garde drama on Nov. 11 to perform for students and parents so that they can experience the themes of culture, facism and virtue that this show includes.

However, the WHHS’ students are making the show their own and adding a unique perspective to it while also being mindful of the mask mandate that is still enforced inside the building.
For this show, the costume designers have made full face covering caricature masks of their characters. Because of the incorporation of these caricature masks, the cast does not have to wear face masks during their performance.

The inclusion of these masks add a sense of mystique and thrill in this already daunting production. The theatre department is also experimenting with a unique theatrical style in a sense that the whole production will be performed in a black-and-white setting.

“We’re also doing it all in grayscale of the Twilight Zone, so it’s going to be a very off-putting kind of adventure for our audience simply because it’s not in color; it’s not realistic,” Raymond-Goers said. “But the storytelling is really sort of on point, even for today’s cultural situation.”

SENIOR Sadie Gray, head mask-maker and costume designer, has been an asset in completing these masks.

“I think a lot of my inspiration has been rooted from cartoons that I grew up watching, like a major one would be the Triplets of Belleville which is a French cartoon that I grew up watching. Some Tim Burton kind of plays into this claymation, similar to Corpse Bride. So it’s about taking those animated movies that we all love in translating it into a kind of creepy fever dream,” Gray said.

Because these masks are a new concept to the portrayal of this play, and new to our costume team, there was no certainty that it would succeed, but luckily the students were able to create a mask that perfectly represented the ghastly theme they wanted.

“I think a lot of costuming includes limits on your creative control, because a lot of choices are directorial based choices. So I think a lot of this, especially when you’re working with masks, takes a lot of the actor’s work away because the expression that they’re usually able to use is taken away. So a lot of responsibility goes on you for making them expressive enough to make up for the lack of expression. So we just went headfirst, right into just going for it and making it our own,” Gray said.

As opening night creeps around the corner, the costume and prop designers are ecstatic to see their work displayed on stage in front of a long time absent, live audience. Gray hopes the audience has a positive reaction to the team’s creative embodiment of the full face masks.

“I just really want them [the audience] to kind of feel a little familiar yet distant feeling when seeing the masks,” Gray said.

Parents, students, and staff can buy tickets on the theatre department’s website but must move quickly due to the limited amount of tickets available.

“The district policy says that we can’t sell [tickets] except 25% of our capacity. We have fewer tickets to sell than we’ve ever had before,” Rayomond-Goers said.

The cast and costume team are excited to see the final outcome of the show on opening night.

“[I’m most excited for] All of the looks coming together. I think right now it’s a slow process of introducing working with the masks for the actors and I feel like opening night is where it all comes together and where it’s put on display for everyone to see,” Gray said.

In her fourth year as a Chatterbox staff member, Hajra Munir is enthusiastic to work as the Managing Editor of Student Life.  Munir's goal this year is...