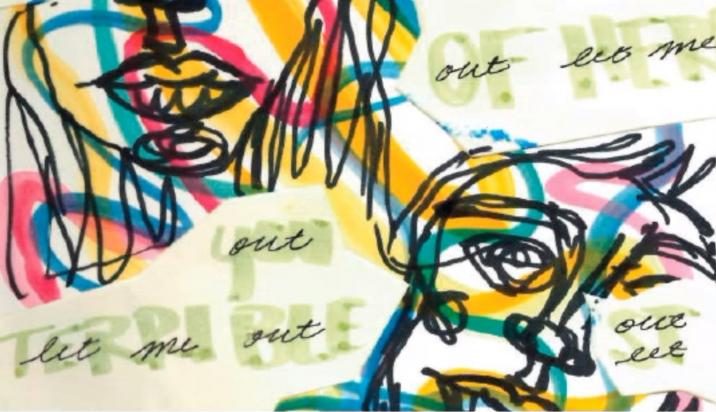 SENIOR Allyson Garth creates representational art. This piece showcases some of Garth’s internal struggles, such as feeling caught in her own mind. It reads: “My life is a puzzle, why can’t I solve it!” and “Let me out.” (Allyson Garth)

SENIOR Allyson Garth creates representational art. This piece showcases some of Garth’s internal struggles, such as feeling caught in her own mind. It reads: “My life is a puzzle, why can’t I solve it!” and “Let me out.”

Sitting in class, I’m trying to focus on taking a test. I hear a pen clicking somewhere. Naturally, I look around trying to figure out who is clicking their pen. No one is. I become less focused on the questions on my paper and more on the sound of the pen. It is incredibly distracting and irritating for me but there is nothing I can do about it because the pen isn’t even there.

I have schizoaffective disorder and for many, that is terrifying to hear. I find myself avoiding talking to anyone about it; I am afraid that they will treat me differently or stop talking to me all together. The word itself has developed a negative connotation and that affects my life as well as the lives of the surprisingly large population of individuals suffering from it.

The word itself has developed a negative connotation and that affects my life as well as the lives of the surprisingly large population of individuals suffering from it.”

On a daily basis, I experience hallucinations, delusions, paranoia, mania and sometimes bouts of depression. My hallucinations are typically minor, but usually are connected to my level of stress. Being a WHHS student, that makes handling the numerous everyday stressful situations that much harder.

Stress is one of the main reasons for my symptoms. I remember being in tenth grade, swamped with homework, and working through the fact that I had been re-diagnosed again, feeling as though everything was piling up against me. Talking about my issues had caused me to lose friends and isolated me to the point where I didn’t know if it was ever going to get better.

I acknowledge now that going through my sophomore year’s struggles only made me reflect upon myself and truly find the things that help me cope, but also showed me the extremely negative cultural stigma of severe mental illnesses.

The most common portrayal of individuals with schizophrenia in movies, books and tv shows is a homicidal maniac that has little control over himself or herself. This could not be further from the truth. It pains me every single time I hear someone use a mental illness as a colloquialism for a minor issue they are having or see another schizophrenic homicidal maniac in a movie I am watching.

Currently the Equal Employment Opportunity Commission technically protects individuals from being fired on the basis of mental illnesses. However, they can choose not to hire an individual with a mental illness if the issue is apparent and/or would affect work performance. That means if an employer has an issue with my condition, they can choose not to hire me altogether, which forces me to stay quiet about my struggles.

Living life in fear and resentment of something I have no control over causes a different kind of anguish.

Every time I am struggling, or even when I am looking back on a time I was struggling, I find that I am angered by the fact that I have to deal with it. I’ve spent so much time asking myself, “Why me? Why am I the one who has to deal with this? Why won’t this just go away?” At times it gets really rough because I just don’t want to deal with it anymore, but I acknowledge that it may never fully go away.

Although I face a unique struggle, I don’t wish for special treatment.”

Although I face a unique struggle, I don’t wish for special treatment.

For a long time I was avoiding conversations about it and even pushed off going to see someone about my symptoms simply because I didn’t want the negative connotation of having schizoaffective disorder to affect my life. Now, it seems that the best way for me to express my struggles and cope a little better is to be open and honest about the struggles I am facing.

It is important that as a society, we acknowledge that serious mental illness does not make a person inherently bad. Just because a person has something like schizoaffective disorder does not mean they are a homicidal maniac like society and pop culture may portray them to be.
Society has an extremely large problem with jumping to conclusions based on loose evidence. People make assumptions that can sometimes affect others for the rest of their lives. The best way to change the culture surrounding serious mental illnesses is to educate ourselves and to be understanding that everyone is fighting their own struggle. 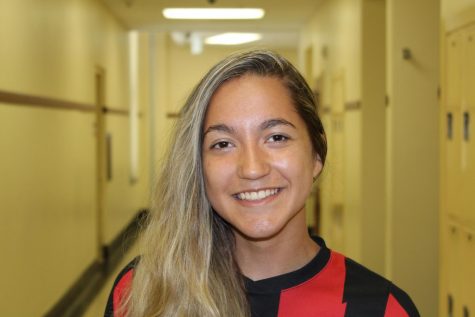 In her 3rd year as a Chatterbox staff member,...