Everything you need to know, start to finish, about this extraordinary season 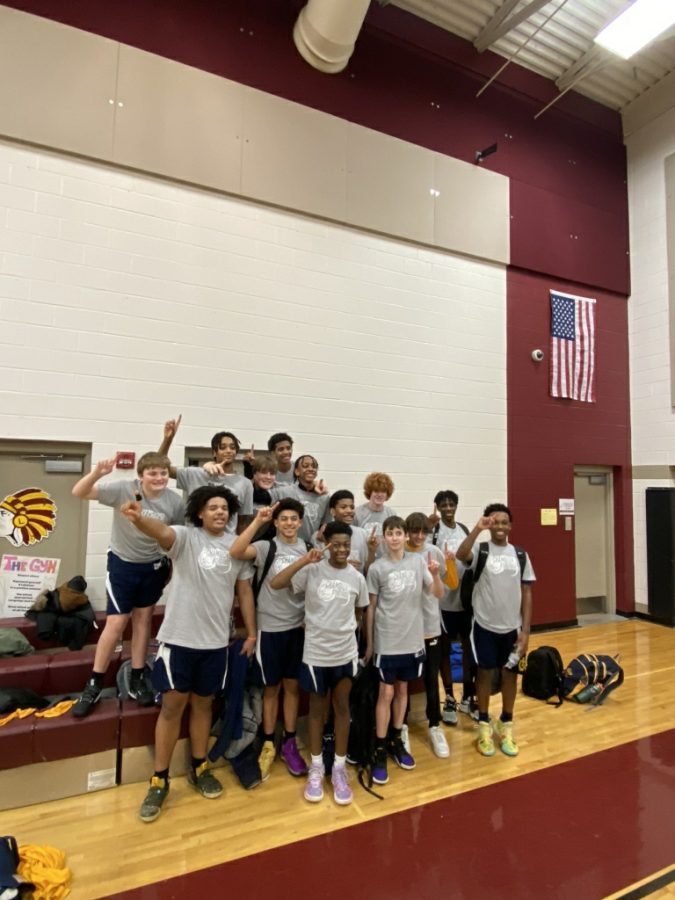 After a long, hard-fought season, the eighth grade boys basketball team were victorious in the ECC championship game.

But some may not know the whole story so let’s go back to the beginning. Tryouts for the team were on Oct. 29 and 30, giving aspiring players two days to show off their talent. Some returning athletes such as Bryce Richardson, ‘26, came in with a lot of confidence.

“I knew I was going to be on the team but I still wanted to show that I was one of the best players there,” Richardson said.

After tryouts ended, the team was set and coaches could already see that the team was going to be very competitive.

“I felt we were going to have a solid team, with new guys [and players] from last year,” Charlie Stoffregen, ‘26, said. “I knew we had another chance for the championship.”

The opinions on the team between players and coaches wasn’t much different.

“At tryouts the talent was definitely there,” assistant coach Chuck Knight Jr, said. “I didn’t know the players personally because I am new to Walnut. After about a month of practice, I definitely thought we had a championship team.”

After tryouts, it was time to get down to business with six practices a week. Many players agree the practices were difficult, but very beneficial for team building and getting better at basketball.

“[Practices were] very intense; we had to run more than people who did track, but it helped us get a lot better, and also be more serious,” BJ Samuel, ‘26, said.

Even though players may not have liked the difficulty of practice, Knight had a reason for the hard practices.
“Coach Anderson and I wanted to make practices as tough as possible, because we knew it would be the only way to make them show their true potential,” Knight said.

In their first six games they picked up four wins while only losing two, going into winter break on a high note. While the games paused during winter break, WHHS sure didn’t, maintaining their six practice dates a week. The practices paid off when they won their first two games back, making their record six wins and only two losses. The wins slowed down a bit in January against some of the top competitors in the league, despite this fact the team’s focus and morale did not suffer.

“There were a lot of ups and downs, but the team was able to persevere through tough losses, and able to still be good even though some players were not able to play because of COVID and academic priorities, they were still able to win games,” Knight said.

Some members of the team figured out what was going wrong and how to improve on it.

“I’m pretty sure that we were the best, and the only thing that would stop us was a lack of energy, confidence, and hustle,” Samuel said.

After the regular season the eighth grade boys basketball team ended with a record of 10 wins and 6 losses. While the record is still good, many members of the team thought they could’ve done better.

“I felt that [our regular season record] could’ve and should’ve been better than it was and that we should have honestly went undefeated but we didn’t have a lot of team work,” Samuel said.

“[Our regular season record] was pretty good but we had the talent to be undefeated,” Stoffregen said.

For the team, the regular season was all in the past and it was time for the championship, and it was only confidence coming out of the WHHS locker room.

“I went in with the mentality of just beating the other team and I was just focused,” Richardson said.

While everybody was excited and confident for the big game, the coaches came in with a strategic approach.
“We were fairly confident because we had split with Kings during the regular season,” Knight said. “In the first game they beat us, but in the second game we were able to match their physicality through scouting and such. While we didn’t have a guaranteed win going in we felt fairly confident.”

“I was extremely happy knowing that we had finally won. I couldn’t play because I broke my wrist but seeing the score board and knowing that our hard work and energy paid off was really exciting,” Samuel said.

It was a thrilling win for the players and coaches alike, but for Knight it was a special win. “My reaction [to the win] was one of extreme excitement, because after previously coaching at Withrow against Walnut, I longed for a championship, which I couldn’t get at Withrow,” Knight said. “Then when I came to Walnut and we won I was overwhelmed with excitement.”

Even though they just got off their championship win, players are already looking forward to high school as most said they would like to play basketball at a higher level.

When asked if he was going to play basketball in high school, Stoffregen said, “Yeah for sure, that’s been my dream.”

Then when Knight was asked if he thought his players had the ability to play basketball in high school he said, “Yes, yes, I think the players from the championship have great potential to play in high school, and I look forward to seeing them grow and succeed in high school.”

In his interview, Knight also wanted to express his gratitude to WHHS.

“This was a very special season for me personally, not being a graduate of WHHS, I wanted to thank Walnut for welcoming me with open arms, and I especially want to thank my players for letting me coach them,” Knight said.