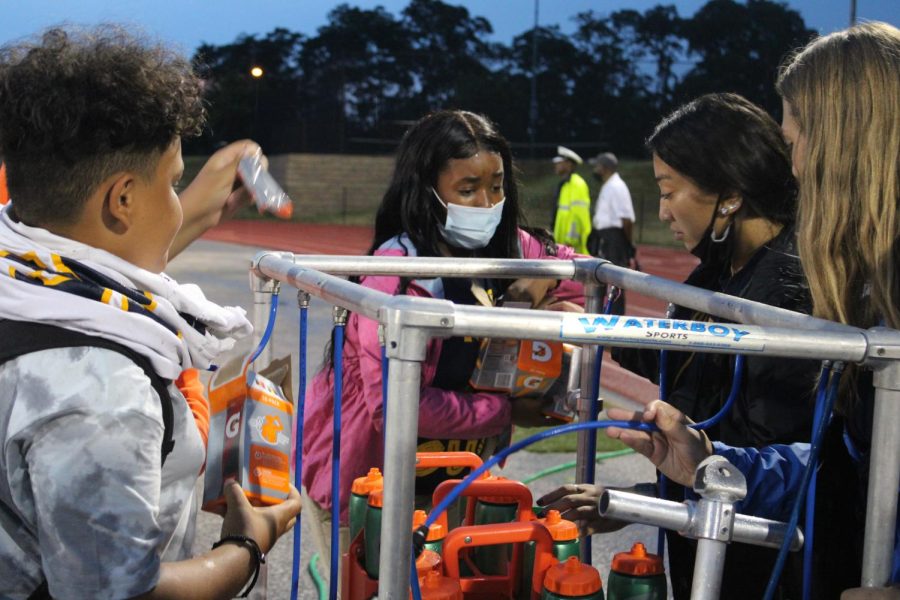 Athletic trainers are in charge of the water station during the football games, home and away.

A relatively unknown support staff behind the WHHS football team is the seven student athletic trainers, who do a wide variety of jobs to help the team. SENIOR Eleanor Frost was a student trainer for the first time, and greatly enjoyed her role.

“This is my first year doing it,” Frost said. “I only found out about it from one of my friends who is in one of my classes, but I wanted to do it since I was a freshman. I just didn’t know the opportunity was available.”

Towchick is able to serve as a role model for the junior athletic trainers throughout the athletic seasons. This program allows students to discover if a career in sports medicine is right for them.

“I’ve always wanted to work with athletes and I want to go into it as a career. So being able to get hands-on experience was a good thing,” Frost said.

While the experience enables students to try out a possible career, it also allows them to form connections with the players they treat.

“My favorite part was getting to know athletes because they are so much fun and to have that community is really nice,” Frost said.

The athletic trainers are able to form these connections with players because they are there through every step of the season.

“We set things up for practices and games,” Frost said. “We get the tents and all the medical equipment out. During the games we actually do water for the athletes because they can’t touch [the water bottles] because of COVID.”

As the winter sports season approaches, only two athletic training spots are available, but fall season trainers such as Frost, hope to be back on the sideline in the Spring of 2022.