Into the Walnut Woods 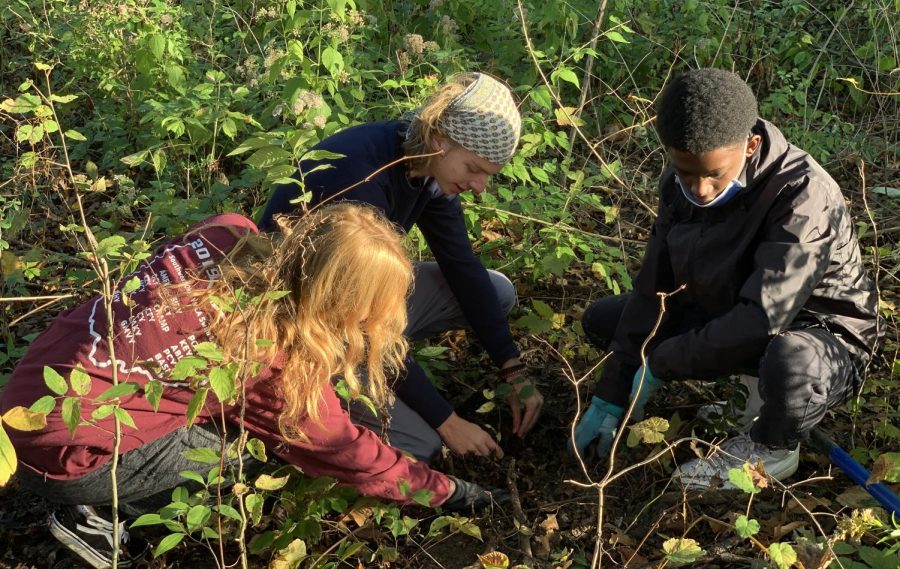 Annalise Smith, '23, Calvin Brandt, '23 and Rickey Johnson, '23, plant trees as part of the "Walnut Woods project" to make the woods more habitable for native plants and animals. The project began as a small student effort bus has now expanded, gaining support from the Evanston City Council as well as the Cincinnati Parks and the Civic Garden Center.

“The Walnut Woods” has gone from an overgrown field full of invasive species, harmful to our local wildlife, to a steadily developing ecosystem for native plants and animals right in the backyard of Walnut Hills High School.

“The Walnut Woods project” was started roughly five years ago when a group of students saw a space, right between Sular Avenue and Jonathan Avenue, and decided that someone needed to step up to care for it.

WHHS science teacher, Alexandra Mondini, heard of the students’ idea and immediately stepped in to see what she could do to help the cause.

“It started out really small, we didn’t have a whole lot of support, but the project just kept gaining momentum,” Mondini said.

The project began by simply cleaning up the woods and getting rid of the invasive species that were harmful to the living things around them, such as honeysuckle. As more and more volunteers got involved, the project saw community wide support by not only the Evanston Community Council, but also by Cincinnati Parks and the Civic Garden Center.

With support from the community, Mondini and the students of WHHS were really able to further their plans for the space.

“We have a greenhouse at Walnut that hasn’t been used in many years… With the Green Club at the time, we started germinating native trees and growing them in house,” Mondini said. “It kind of wrapped into the woods project because we were removing all the invasive species, these bad plants that aren’t contributing to the ecosystem, and now we’re planting natives that will support local wildlife and environmental education at Walnut.”

Since the project began, the space has now been named an official Cincinnati Park, featuring trails for walking and an assortment of native trees sprouting up from the once untouchable grounds.

On the morning of Saturday, Oct. 23, volunteers from around the community, as well as WHHS students, gathered in the woods for their third annual tree planting event.

“It’s going to help the overall community by creating this little 10 acre space where birds, even though it’s surrounded by highway, native species and native birds will be able to come through here and that will overall help the whole ecosystem,” SENIOR Tierney Shafer, a volunteer at the event, said.

The event was a success, as more than 300 trees were planted across the 10 acres space in just one morning.

For Mondini, the end goal of the project is not only to create a healthy and accessible habitat for local wildlife, but also to create a space for WHHS students to have access to a natural area for their curricular needs.

“When you can walk out your front steps and have a whole woods at your disposal, we should be trying to do more hands-on environmental education,” Mondini said.

At the end of the day, the project still has a long way to go, but the progress that has been made on the space will only have positive results on the WHHS community for many years to come.

“If there is a lesson to be learned from my experience with this project, it is don’t let perfect be the enemy of good,” Mondini said. “If those students hadn’t just gone out there and got started, then the project may have never been started. If you see something wrong that you want to fix, just go out there and start doing it and it will snowball. Good brings more good and that’s how change happens.”