For us: On Tyranny book review 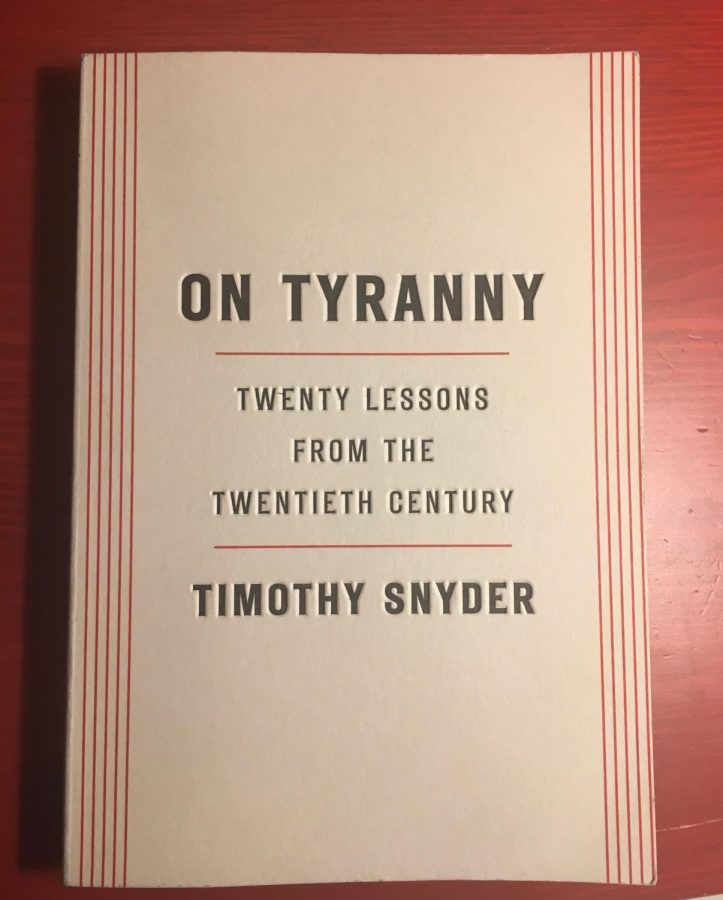 On Tyranny by Timothy Snyder was released in 2017, and is now more topical than ever. It provides a look into the history of tyrannical regimes and how our generation is the key to keeping our democratic values.

The book On Tyranny, by Timothy Snyder provides us with a historian’s guide on how to avoid a path of authoritarianism, supporting his points with real world examples and arguments.

On Tyranny was written for us. It feels uncanny how Snyder talks directly to us, not merely serving as an instructor, but, On Tyranny, serving as the curriculum in itself about the history of tyrannical regimes and how as a people we can stop one. From the outside, On Tyranny looks like it was written for adults or older people, but truly this isn’t the case. We were the target audience: students, Gen Z, young people.

In school we learn a lot about horrible atrocities and events in great detail. Rarely, however, do we learn how they happened or came to be. The “how” is often lost in the sadness of these atrocities, but it is important to look at what can cause it, and how to avoid one in the future.

Snyder has the near insurmountable task of explaining the “how.” He does so in 20 brief lessons, highlighting various events from the last hundred years and the steps you can take to think freely for yourself.

These lessons are very simple as well, they range from making small talk with acquaintances to subscribing to print media.

To keep the book flowing and keep the reader engaged, Snyder uses a lot of big words, which may be intimidating at first glance. It is immaculately clear that Snyder is an intellectual; his writings are some of the most dense pieces of work I’ve seen, but still, Snyder doesn’t talk down to the reader.

A lot of writers use grandiose vocabulary to describe very pedestrian events. What makes Snyder different from these writers is not just what words he uses, but how he uses them. Word choice and word placement go hand-in-hand in On Tyranny, as he uses important words when describing important events.

With each lesson being around two to six pages each, Snyder is succinct in his synopsis of his points, and supports his claims with varying pieces of evidence and apropos examples.

Each lesson is an extension of the last, building upon the foundation James Madison and Alexander Hamilton laid, creating a piece that is not only educational, but inspirational.

Snyder’s collection of writings in On Tyranny were created for us, and Snyder shows off his ability as a motivator. So many respected scholars talk down on our generation, saying we’re lazy or weak. Our sensitivity often overshadows our empathy in the media.

Snyder understands that education is more important than admiration. He is one of few Americans who sees that the past is not of subsiding irrelevance. He’s studied history and knows what people are capable of. However, he’s also an optimist.

On Tyranny serves as an outline for our generation to understand the past, find meaning in the present, and make some sense of the future.