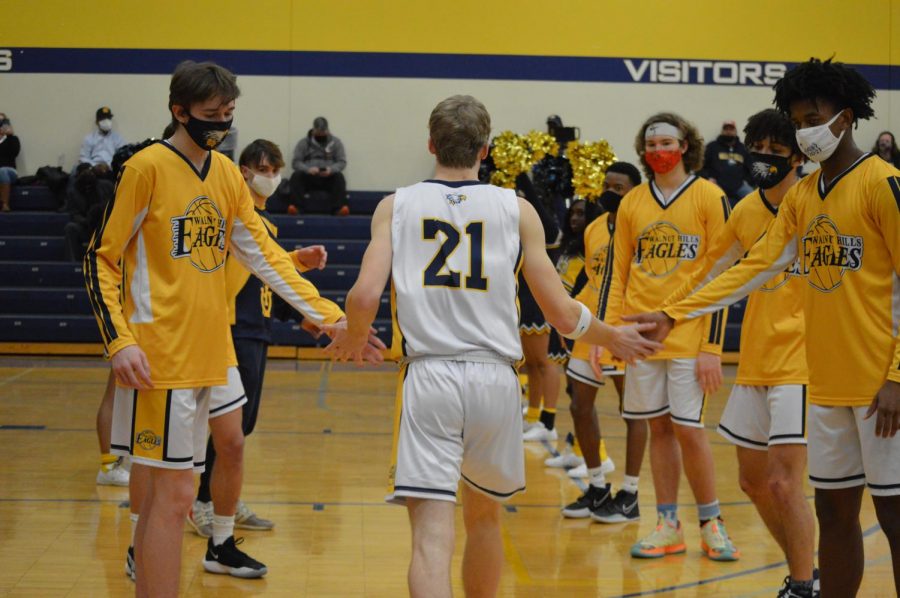 As SENIOR Collin Miller laces up his shoes for his final few basketball games as a WHHS eagle, he thinks back to before COVID-19 struck and gave a hanging uncertainty over his athletic career.

“My best memory was all of the loud and crowded home games,” Miller said.

Would Miller get the chance to play again, let alone with fans? The school board’s decision eventually confirmed he would be on the court this season, and Miller was determined to make the most of his final season.

Miller has broken out as one of the most versatile players in the ECC, giving as much to his team offensively as he does defensively.

The Eagle’s first game of the season was against their most prolific opponent of the year, but Miller took charge as he put up a solid 5-9 shooting against Moeller, the eighth ranked team in the nation.

In the same game, Miller made four 3 pointers, which ended up being the most threes made in one game this season by anyone on the Eagles’ roster.

Not only was Miller a force from three on offense, he caused trouble for Moeller on the other end of the court, snagging two steals and two authoritative blocks. Miller certainly wasn’t slacking in the board department, going up for six rebounds, three on both ends. Miller was feeling charitable this game, racking up four assists for his teammates. Although they ended up falling short in an 81-65 loss, Miller set the tone for the season.

Miller started the season hot, but this isn’t anything new. Miller landed a spot on varsity his freshman year and has been polishing his game ever since. During the offseason, he was locked in on improving his strength and shooting.

“I think my physicality has improved a great amount and I have gained a lot more confidence on the floor,” Miller said.

“The best part of the season has been beating our ECC opponents pretty soundly,” Miller said about his senior campaign, and that they have, going 10-2 and beating every opponent they’ve faced with the exception of Lebanon who currently place first in the ECC.

The team’s most recent victory ended up being the largest deficit of the season, putting up a dominant 81-36 performance against Little Miami where Miller saw his team solidify as a unit. “Going up 20-0 against Little Miami really made it seem like these guys are here to win.”

There are no statistics that show leadership, but Miller believes a strong team is built on strong guidance and stepping up  as a senior is important.

“I feel like every year a senior has the role to lead this team and I get the chance to take over and lead this team,” Miller said.

Miller has created a tight-knit squad who every game is purely engrossed in winning through direction in practice and bonding off the court.

“He’s always been that guy on the team who pushes you to be the best and give your all every minute on the court,” his teammate Kellen Porter, ‘22, said.

Miller’s mindset of doing whatever it takes to win, trying to utilize every tool on the court, has rubbed off on his team as they are playing some of the most fluid, team-oriented ball in the league.

Practice can be fun, and Miller thinks teammate Owen Murray, ‘22, is the prime example. “My least favorite to play against is Owen Murray because he will shoot it from anywhere and there’s not much you can do about it,” Miller said.

Although he is parting from WHHS to pursue baseball at Belmont Abbey, Miller won’t forget the time he spent on the court. “I’m going to miss the physical contact that comes with basketball as well as all my coaches and teammates,” he said.

Miller will be remembered by his teammates for his guidance and leadership along with his versatile skills on the court.

“Collin will go far in life. He has a great work ethic and he knows what it takes to get the job done,” Kellen Porter, ‘22, said.

Miller has remained as one of the biggest influences to this team and wishes to leave some advice to any players in the future that hope to get to be in his position.

“Follow Walnut’s system and if you’re not as skilled as some of your teammates, look for other ways you can contribute to the team,” he said.