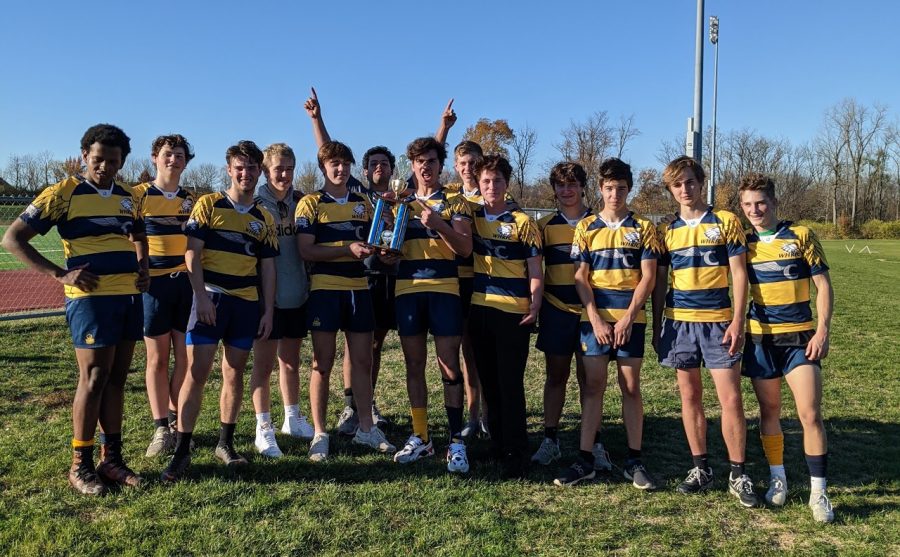 Coming off of a successful season of fall sevens, finishing with a win to loss of seven to five, and winning the Ohio Social Division Championship, the Walnut Hills Rugby Football Club is gearing up for their spring 15’s season.  Changes have been made to the game due to COVID-19, throwing most players into the deep end.

For the fall sevens season, which is the game of rugby union with only seven players per team with two seven minute halves, Ohio Rugby decided to scrap many aspects of the game as extra precautions in case of COVID rising up again.

Key features of the sport, most prominently rucks and scrums, rucks being defending the ball after a tackle and scrums being a key penalty play, were removed because of the close contact between players. Because of this, many players who lost their 2020 spring season were taught  this modified version of the game instead of proper rugby union.  This seemingly will not stop the club’s momentum.

When head coach of the boys rugby club, Tony Schenke, was asked whether he thinks this season will be played as well as the previous sevens season, he said “The players, almost all of which are coming back for the spring, made great improvements throughout the season and we saw that when we won the Social Division. I think that creates great enthusiasm and momentum going into the spring 15’s season.”

“I think in 15s we’ll probably have the same learning curve as we did in sevens, start off figuring the game out then getting comfortable and dominating the field,” Armstrong said.

Enthusiasm doesn’t always equal skill or ability on the pitch.  The game is returning to some normalcy this season, with scrums and rucks being brought back into the game, practicing will have to change with the rules.

“…Fitness, catch and pass, and tackle. If we can excel in those, we’re already ahead of the curve,” Schenke said when asked what he was going to change for this season.

Most players, whether or not they trained during the off season, will have to practice with determination  and try to learn the returning features of the game.

And skill in the game aside, COVID-19 is still a threat to the game and most sports in general. While it may not be on the rise currently, the possibility of another spread happening is at large.

“Covid is definitely a threat to the season and our players’ safety, it’s worrying ” WHHS scrummie Silas Coleman, ‘22, said.

Even though player contact isn’t sustained in rugby games, there is always the looming fear of someone catching the virus. Coach Schenke has been taking plenty of precautions, however, to make sure there is as small a chance as possible for the players to get sick.

A season sure to be filled with ups and downs, the rugby club will have to prepare for every possibility, whether it’s having to train for new parts of the game or social distancing to keep every player safe, WHRFC is making sure that they will be prepared for anything.

Disclaimer: Gabriel Wilson is a member of the WHRFC.