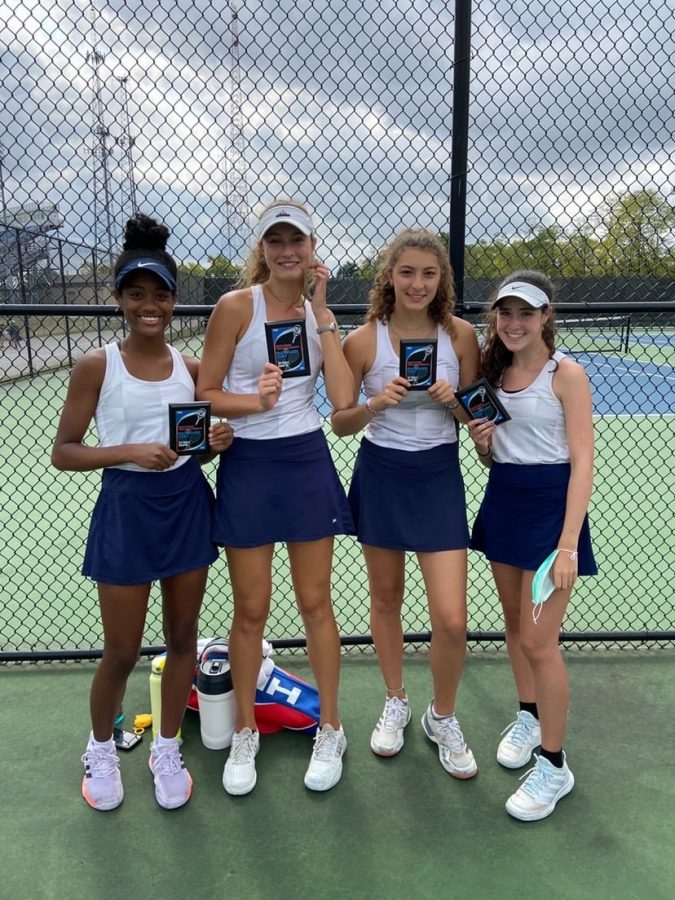 Proceeding all of the panic and stress of the pandemic, sports began to resume a tweaked normality. Not only was their regular season different, but the end of season tournaments that players  strive for and compete in have also been rearranged to suit COVID-19 needs.

Players have been used to participating in and enjoying these tournaments with this year being no different, but some of the aspects lost are missed by the athletes. The women’s tennis team competes in the Cincinnati ATP tournament every year, and some players are reminiscent of the pre-COVID activities.

“I miss being able to high-five my doubles partner during a match and being able to hug my teammates at the end of the season,” Pilar Steward, ‘23, said.

In team-oriented sports, teammates often create a close bond and have much more chemistry because of it. SENIOR Grayson Allen wished the team could have gotten a little closer this season.

“What I miss most is hanging out with our team before and after practice. I feel like the team had less chances to be friends and have our friendship go beyond tennis because of COVID,” Allen said.

Along with the team’s chemistry facing a minor setback, another challenge comes with a lack of practice.

Individual practice is beneficial, but without being able to play side by side with your doubles partner on the court, it becomes challenging to play as well. Even singles players are missing the coaching that comes with practice. “Practice makes a big difference,” SENIOR Jane Carnesi said when asked what challenges the pandemic brought.

Despite all this, the WHHS women’s tennis team were able to make deep runs in the tournament, including standout Alexis Covington, ‘22.

The Division 1 Singles Bracket at the Divisional level of the tournament began on Oct. 10, with Covington being a #4 seed, and rightly so. Smashing Lykins of Oak Hills 6-0,6-0 in straight sets, she proceeded to give the same treatment in the next round to DiFillipo of Lakota East, giving her another 6-0,6-0 win. Neha Arcot, ‘25, of Ursuline gave her a minimal challenge in the first set, Covington coming away with it 6-2, but took another 6-0 set right after, sending her to the Semi-Final against Elizabeth Pendergast, ‘21, of Ursuline who had defeated teammate SENIOR Emma Maher of WHHS in the Round of 16.

Unfortunately, Pendergast of Ursuline was too much for Covington as she rolled to 6-0 and 6-1 sets. Pendergast would go on to win the Divisional round.

WHHS athlete Claire Meng, ‘22, also participated, winning her first match but losing out in the first round to Elise Ostrander, ‘22, of Milford in 7-5,6-0 sets.

In the doubles Divisional Tournament, Aubrey Lauer, ‘23 and Steward teamed up for WHHS, along with SENIORS Grayson Mentzel and Carnesi. Mentzel and Carnesi were defeated by Turpin, losing out in the First Round in 6-2,6-0 sets. Lauer and Steward were able to make it past Talawanda in well contested 6-4, 6-3 sets, but fell short in the next round to Lakota West in 6-1,6-0 sets.

Covington’s run in the Divisional set her up to be the only Eagle participating in the State Tournament, but unfortunately lost out in the first round to Danielle Schoenly of Powell Olentangy Liberty in 7-6,6-0 sets. There isn’t a doubt in her teammates’ mind that Covington  will be back next year.

With COVID numbers steadily increasing, players are fearful of the implications the virus will have on next year’s tournament, but are looking to the progress of vaccinations as a beacon of hope.