Simoné Simmons, ‘22, on inclusion in education 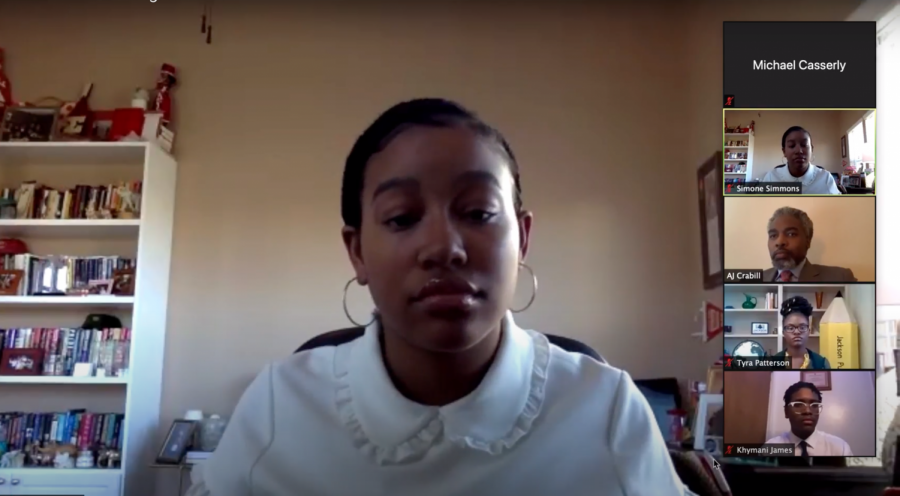 Simoné Simmons, ‘22, participated in a national student panel sponsored by the Council of Great City Schools in conjunction with the Urban Coalition on Oct. 16.

Simoné Simmons, ‘22, was watching the news in May, and what she saw enraged her. The murders of multiple black people by police rocked the nation. Unable to attend protests due to COVID-19 concerns, Simmons was desperate to find a way to have her voice heard. Instead of marching downtown, she picked up a pen and paper, and wrote a letter about her concern and anguish over the things she was witnessing, ultimately sending it to the CPS superintendent.

“I didn’t want to just sit at home and just watch everything take place. So I just wrote a letter. And I think I sent it the same day,” Simmons said.

Following the letter, the school district reached out to Simmons, and asked if she would be interested in joining a new club called Speak Up and Speak Out.

“They actually reached out to my mom [a CPS teacher] because I wrote [the letter] in May, about dealing with all the crazy racial stuff that was going on.”

The club strives to amplify the voices of black students in a district-wide virtual conversation that welcomes open discussion and dialogue with Cincinnati city leaders about creating change in the community. Simmons also played a role in the school board with a few other students, bringing their voices into discussions to improve the CPS racism policy.

It was during one of the club’s sessions that Simmons was noticed by the Council of Great City Schools, and asked to join a virtual panel held on Oct. 16. The panel, sponsored by the Council in conjunction with the Urban Schools Coalition, sought out students from across the country actively involved in the improvement of their schools and communities.

“On that panel, I met some amazing kids doing great things,” Simmons said, “Our generation is such a powerful generation, we just need everyone to chip in to use their voice to make a change.”

Simmons and other students spent the hour-long session discussing topics that ranged from general questions on the impact of race and social justice issues on individual communities to specific actions students would like to take in the classroom setting.

One of the topics touched on involved what teachers can do to support students of color and educate other students on the history of marginalized communities. Simmons was especially passionate about the role of education in this process.

“[Education is] probably what’s most important to me, because in a way, especially in the history field, I feel like the educational system kind of failed me because there’s still so much stuff I hadn’t learned, some stuff I learned on TikTok videos that I’d never heard of,” she said.

Simmons’ main concern with education is the role it will play for those entering high school in the coming years. “I just feel like, for the younger generations, there’s so much key stuff that we need to know, and I’m really just pushing for that the most.”

Simmons maintained that it is the responsibility of both teachers and students to make sure that the curriculum is representative of all people. “It’s our future and we should have a say in what is taught to us.”

As for advice to teachers, she said that the best thing they can do is to include student voices and encourage their ideas and contributions, even if it may require opening up to failures. “To educators, I would say, push for those uncomfortable situations.”

She added, “Our teachers need to have more conversations about the current situations, not just the past.”

She also believes it’s up to the students to help create this change, inside and outside of the classroom. “If there’s a rally, try and go to it, if there’s a petition to sign, sign it, if you can donate, donate; it’s the little things that matter.”

Her final message to readers was along these same lines: “No matter who you are or where you’re from your voice matters, and I feel like sometimes it’s easy to feel that your opinion doesn’t matter, or nobody’s going to listen to what you have to say. But everybody’s voice matters, and you just need to activate your voice and your power.”

Simmons wasn’t always the outspoken and active speaker she is now. She credited her mother as her inspiration. “Just watching her grow kind of encouraged me and she’s always encouraged me because I’ve always been the quiet kind of kid and I’ve always been in the background while other people were in the front.”