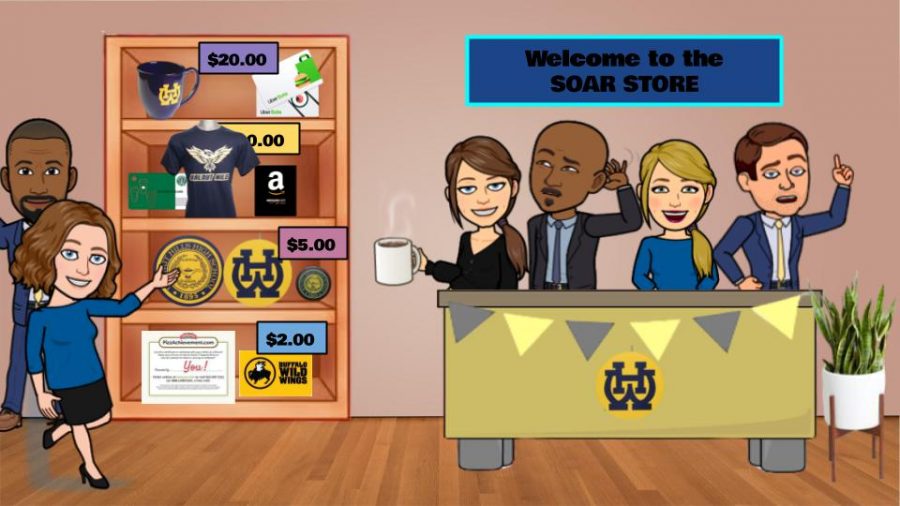 The Virtual PBIS Soar Store displays the different tiers of prizes. The store was created to motivate students to exhibit positive behaviors during school.

The PBIS SOAR Store is now fully up and running and ready for people to cash in their Eagle Bucks.

The store is based on the SOAR acronym which stands for success, own your actions, accept, and resiliency. The matrix on Schoology lays out examples of behaviors that fall under each category such as logging in on time, being supportive of classmates and their opinions, commenting during lessons, and asking for help when needed.

“We have a PBIS committee and the committee came up with an acronym which is SOAR,” Assistant Principal Ashley Morgan said, “And each one of those letters stand for something that we believe that should be things that students do in the school so success own your actions. We used to use responsibility but we’ve changed that to resiliency just we feel like in the pandemic it’s an important thing for students to be resilient.”

PBIS stands for Positive Behavioral Interventions and Supports and is an evidence based movement to improve the social, emotional and academic behaviors of students. The store is rooted in the ideas of this movement.

“There’s like a national initiative for PBIS and its research based. So a lot of the ideas like we haven’t come up with on our own, those are things that have already been done nationally. As far as like the matrix and that kind of thing,” Morgan said.

When a student presents a positive behavior that falls under the SOAR matrix, a teacher can award them an Eagle Buck. Once they have enough Eagle Bucks, they can begin to purchase things from the virtual store that correspond with how many bucks they have in their account.

On the first Wednesday of every month at noon the store’s google meet is open to people who want to spend their Eagle Bucks. To enter the Google Meet the code is PBISSOARStore. To check the number of Eagle Buck in an account before joining the Meet email Teresa Christie, the grade level secretary, at christt@cpsboe.k12.oh.us.

There are several tiers to the virtual store depending on how many Eagle Bucks a person has.

Someone can buy either a Buffalo Wild Wings Certificate or a LaRosa’s Pizzeria certificate for two Eagle Bucks, a bumper sticker for five, an Amazon gift card, a Starbucks gift card, or a WHHS shirt for 10, and a WHHS mug or UberEats gift card for 20.

According to Morgan, once WHHS opens back up for students to return and a physical store is possible tickets to athletic games and parking passes will be added to the store.

While the items available in the store may seem eclectic they were all chosen for a specific reason.

“We are asking for donations so a lot of it’s just based on like what we were able to achieve with donations. But the LaRosa’s and the [Buffalo Wild Wings] we get as educators to provide our students for incentives anyway so those were easy and on hand and then we’ve been getting parent donations for gift cards, but we also had students come to our PBIS meeting, and we asked, you know, from their perspective what types of incentives they’d like to see,” Morgan said.

However, the items of the store were an afterthought to the store that started with an idea.

“The assistant principals or like the administrators in the district meet monthly and back in the spring we met with some of the teachers from Withrow, and they do a physical store and obviously that’s something we’d like to do in the future but for now we can’t. So we just decided to make it virtual, so that’s where we are, but it was something that they gave us the idea for,”  Morgan said.

Although the store is mainly to reward students for good behavior with prizes there is an added incentive for teachers as well.

“Teachers also earn prizes from the system so if they are participating by adding students, we’ve drawn teacher names and giving gift cards and different things there’s different incentives for the teachers as well, but they don’t have to participate,” Morgan said.

So far it seems as though the store and the incentives have been working as intended and many teachers are participating. According to Morgan, within a little over two weeks of the opening of the store over 2,000 submissions for Eagles Bucks had already been logged.

With so many participants in the store so far, Morgan is hopeful that the store’s goal will be achieved.

“Our goal with PBIS with the district and then with our school is just to create a positive school culture,” she said, “So instead of focusing on negative behaviors, focusing on what students are doing great, and then being able to give an incentive, or, you know, some type of reward to students for doing great things.”