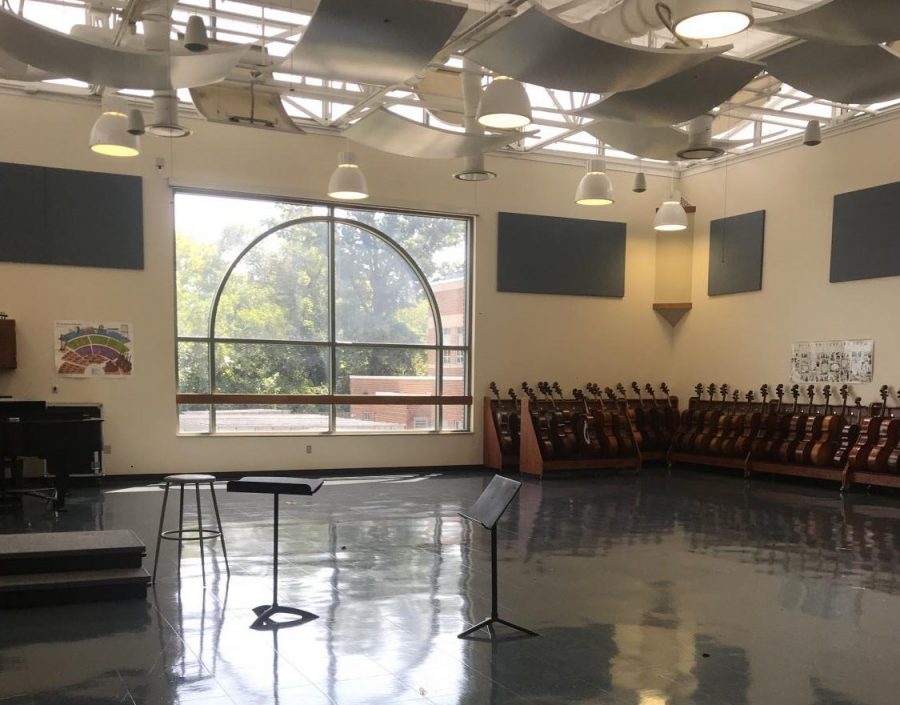 No students have been using the orchestra room this year due to virtual learning.

Orchestra, a class where students perform music together, has faced the many setbacks of virtual learning. Unable to meet as a group in person, directors Christopher Gibson and John Caliguri have had to alter their lessons.

Orchestra typically consists of student concerts and daily rehearsals. Students would chat and tune before lessons, forging bonds alongside musical skills. However, virtual learning has brought a plethora of difficulties continuing former traditions. The biggest of which, according to Gibson, is making sure everyone has what they need.

“We’ve made deliveries to many, many student houses. We’ll go out and change a string if need be, things like that,” Gibson said.

Difficulty accessing formerly available resources isn’t the only thing that’s changed. Due to the COVID-19 pandemic, students have had to switch from playing live as a group to submitting individual recordings through Schoology as well as using two music theory programs: Noteflight and Breezin’ Thru Theory.

“Breezin’ Thru Theory takes [students] from basic music theory all the way to college level music theory… and Noteflight is a software where students can write music, we can listen to what they’ve written and we can share music with them,” Caliguri said.

The switch from in-person guidance to computer feedback has forced students to change the way they learn.

In a live orchestra, students can listen to their peers as they play. This allows them to adjust their playing speed, build off of each other and blend in with each other. Playing in a group allows a musician to play a single part that becomes a beautiful piece when combined with the parts played by other musicians.

Virtual learning has caused students to lose that vital aspect of orchestra. “I worry students will lose interest because they’re not playing their instrument in a group,” Caliguri said.

Along with students growing distant from their peers, a rift has formed between students and teachers. Classes are now being taken through video conferences. This means students’ mics are off, and for the most part, so are their cameras.

“When I’m in class and I see that someone is struggling, or I see their pose is crooked or their instrument is in the wrong spot, I can fix that but when I’m looking at a screen of pictures I can’t get that so I think we’re really missing that human interaction,” Caliguri said.

Students in video calls can’t interact with each other or whisper to their friends during a lecture, and it’s near impossible to know if they laugh at a joke a teacher has told. These little interactions and responses can make a class feel genuine and provide an opportunity for bonding. Without this, it can be hard for teachers to feel connected to their students.

“I really enjoy the face to face interaction. It’s very hard to have that same kind of rapport with a student when all I see is an emoji or a picture,” Caliguri said.

Due to COVID-19, Gibson and Caliguri are doubtful about whether there will be a concert, though according to Gibson they are, “keeping the dates on the calendar.”

Gibson and Caliguri have been toying around with ideas of virtual performances, where students would record themselves playing in small groups and the directors would edit the audio together. They have also considered outdoor concerts, but that brings the issues of the acoustics outdoors and social distancing.

“I think the biggest struggle is what to do with an audience, it’s not necessarily the onstage, it’s the people who come to see the performance,” Gibson said.

While a student concert is still unlikely, they’ve managed to continue with their annual cookie dough fundraiser.

Until Nov. 23 at 6 p.m. customers can place their orders online.

“We’re hoping that the cookie dough is delicious enough that people will remember this one and be willing to order,” Gibson said.

Due to virtual learning, the WHHS orchestra has had to make many changes. Nevertheless, the directors continue to make sure their students excel in music.