Senior night: four Eagles look back on their final season 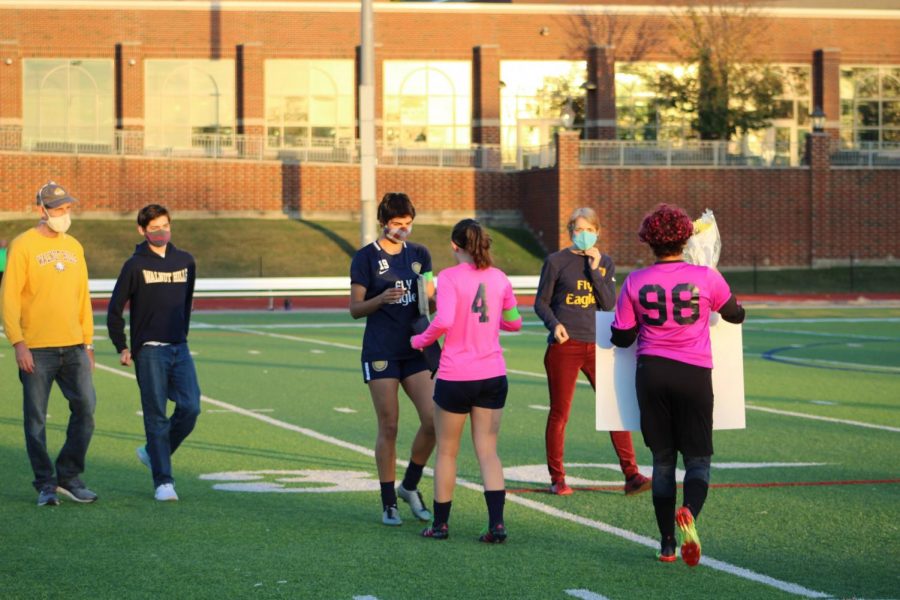 While standing on the field at senior night, Tamar Sella is cheered on by friends and family for her hard work and dedication over the past four years.

Because of the difficult circumstances this pandemic has brought, senior athletes had to adapt to a new way to commemorate their final season as a WHHS Eagle.

“I knew a lot of things were going to change because of the pandemic so I really try to make myself not compare this season to past seasons. I have been on varsity for four years and set up senior nights in the past but I know things won’t be the same so I try not to let the comparison bring me down,” Sella said.

Before the green light was given for games to occur, most seniors were waiting in anticipation and hoping they could get a final chance to return to the field.

“I was really worried our entire season was going to be canceled, and it would have been really disappointing if that was the case. We had tryouts and practices but weren’t allowed to play until about 3 weeks into our season. So we missed out on a lot of matches, which was sad, but I’m grateful we got to play for the rest of the season,” SENIOR varsity tennis player Emma Mayer said.

Although most seniors had an abnormal season, they are grateful to have gotten to play even if some restrictions were enforced.

“I am just so glad we actually do get to play and have our senior night because it was really unsure if any of this could happen,” Sella said.

As players and spectators still got to enjoy senior night, they did have to follow certain rules to protect themselves and others. However, coaches and administrators made sure it was still accessible for others to enjoy in the comfort of their own home.

“Everyone wore masks and there was a very limited audience. Only parents and a very small student section was allowed to come. The game was also streamed over Facebook Live and Periscope,” SENIOR soccer player Braeden Price said.

As seniors walk down the field at senior night, they remember all the memorable times they had as a WHHS Eagle.

“My favorite memory has to be freshman year on JV when we beat St.X for the first time and our coach agreed to get a tattoo because of it,” Price said.

“Some of the best ones [memories] are from the tournaments, just hanging out together on breaks and cheering each other on. It’s also even better when some of us win,” Mayer said.

The senior athletes also acknowledged all the things they’ll miss about being on the team and being a part of a second family.

“I will miss my teammates and my coaches most. I see them as a family and have known many of them for six years. It’s kind of sad to think about leaving them next year but I’m sure I’ll stay in touch with them,” SENIOR football player Hank Perry said.

Mayer will continue to play tennis for fun after high school. She hopes to play on a club team because it still contains that competitive aspect alongside the possibility of traveling to different places.

“I’ll miss seeing everyone every day. I’ll miss high school tennis because it is just the right amount of competition and pressure, and it’s also rewarding to see both yourself and your teammates improve as players throughout the seasons and years,” Mayer said.

This year’s senior athletes have had a final season like never before. Because of all the changes made in their season brought by the pandemic, they have all learned a lot and had some advice for the underclassmen.

“Make the most of every second of it. Play game by game and make each count, because you seriously never know when it could be your last. Our program is looking up and I am confident in all of you that you all have a great future ahead of you. Keep working hard and trust the process. And always be there for each other, especially the players younger than you,” Sella said.