Three theater events: inside and out 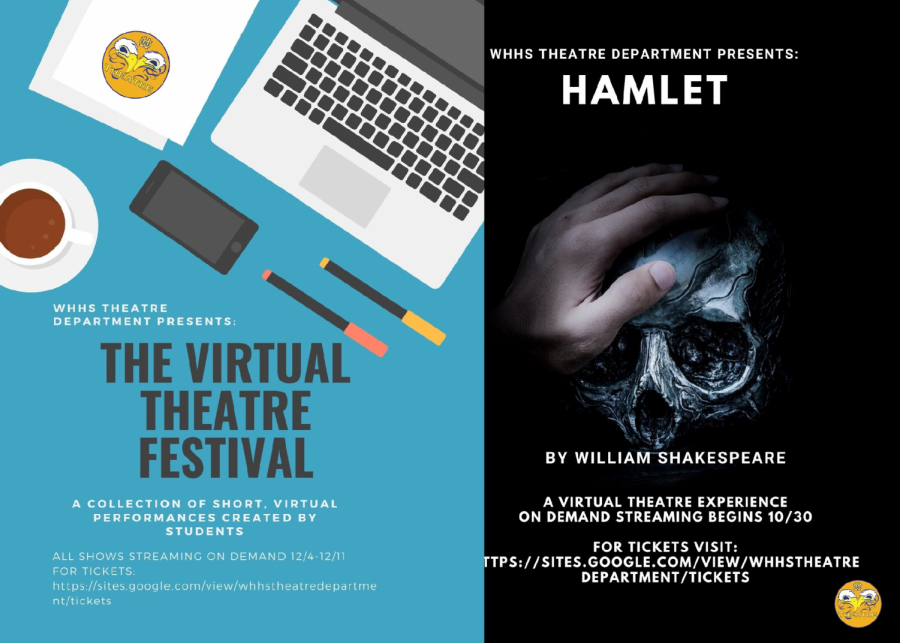 The promotional material for two featured performances for the fall 2020 theater season.

The WHHS theater program requires a lot of in-person and face-to-face interaction. However, due to social distancing, the COVID-19 pandemic has made it very difficult to attend and create traditional theater performances.

WHHS has three programs in the fall season of 2020: A Doll’s House, Hamlet and The Virtual Theatre Festival.

A Doll’s House, a play that was supposed to be live near the beginning of school, was streamed as a radio drama on SmartTix, a ticketing service for online programs, and recorded using Soundtrap because of “the better audio quality” Michael Sherman, one of the directors of WHHS’s theater productions, said.

As a whole, the recording process went as expected with no major issues and the end product, in terms of the acting and video quality, was up to standards considering the current situation. However, with around 10-20 listeners, it was “not as much as we had hoped,” Sherman said.

The other play that will be performed is Hamlet, which will begin to be streamed on Nov. 20 through SmartTix.

“This was a high school production so is open to any student in [grades] nine to twelve,” Sherman said. There were only 40 submissions, which is “lower than usual,” Sherman said. Students needed to audition for the play, and submissions were due in early September.

There is also a Virtual Theater Festival, streamed through SmartTix from Dec. 4 to Dec. 11. The festival will be open to all students, and only video submissions will be accepted.

“Oct. 5 is the deadline for any sort of writers to submit works to the Virtual Theatre Festival which is our last event in the fall,” Sherman said.

The festival will showcase student-created work, such as plays or movies, that fuses the elements of theater and film. Students will create their own works and submit them via email to Sherman to get into the festival. The performances will be available to be watched with the purchase of a ticket.