Recently committed, Nick Presley is going to Ball St. On a Football Scholarship after four years of playing varsity football at WHHS. 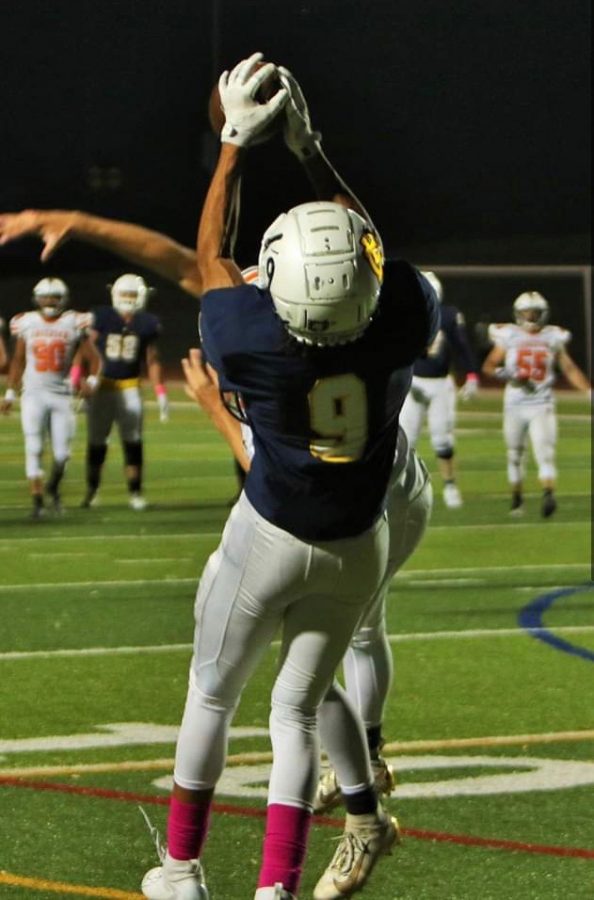 SENIOR Nick Presley goes up to catch a pass near the endzone thrown by the quarterback. One of many touchdowns caught by Presley.

SENIOR Nick Presley has always exuded hard work and determination on and off the football field. Luckily, this hard work has paid off.

Due to the COVID-19 pandemic, Presley’s recruitment process, along with that of many others occurred somewhat differently this year.

For some, this pandemic affected their recruitment negatively. Presley decided to make the best out of the situation, even if it was a puzzling time for everyone.

“The pandemic sped up my recruiting process because I didn’t know if I was going to have a season or not,” Presley said,

“I knew I had the potential to get all these offers, but at the same time I knew how much work I needed to put in if I really wanted it.”

Many athletes find it easier to accomplish when they have someone in their corner constantly pushing for them. For Presley, that was head coach Gary Beauchamp. “[Coach Beauchamp] definitely helped out a lot because he was always reaching out to schools and bringing in colleges to meet with us during school,” Presley said.

To produce more growth opportunities,  Presley has created new goals for his future college career. “I want to go in my freshman year and try and win a spot and play as much as possible. But I also want to finish my first year with 3.0 and try to graduate as early as possible,” he said.

Presley cares deeply about football but also has an understanding of the importance of academic success.

Presley, recently being committed, has learned a lot from this experience. “The lesson I’ve learned is to be patient. You will know when the right time to make your decision is so don’t rush things and find what each university has to offer,” Presley said.

“I thought it was the right time with everything going on and I thought the campus was a perfect fit,” Presley said when asked what led to his decision to commit.

Committing to a college can often be attached to lots of pressure and stress. Presley learned that this decision is solely about following what the athlete truly wants. “I would tell other athletes to just follow their heart because nobody can make this decision but you,” Presley said.

“My advice to the underclassmen is to just trust the process. I know at times you may get frustrated or feel like things aren’t going to work out. But if you just keep your head down and just focus on yourself and give it everything you have then you will be successful one day,” Presley said.

Despite the difficult circumstances this pandemic has brought, Presley will continue to give his everything and focus on himself.

Presley is hopeful to have a senior season at WHHS and if play resumes he’ll be ready to give it his all one last time in an Eagles uniform before going off to Ball State.