Goal-oriented on and off the field 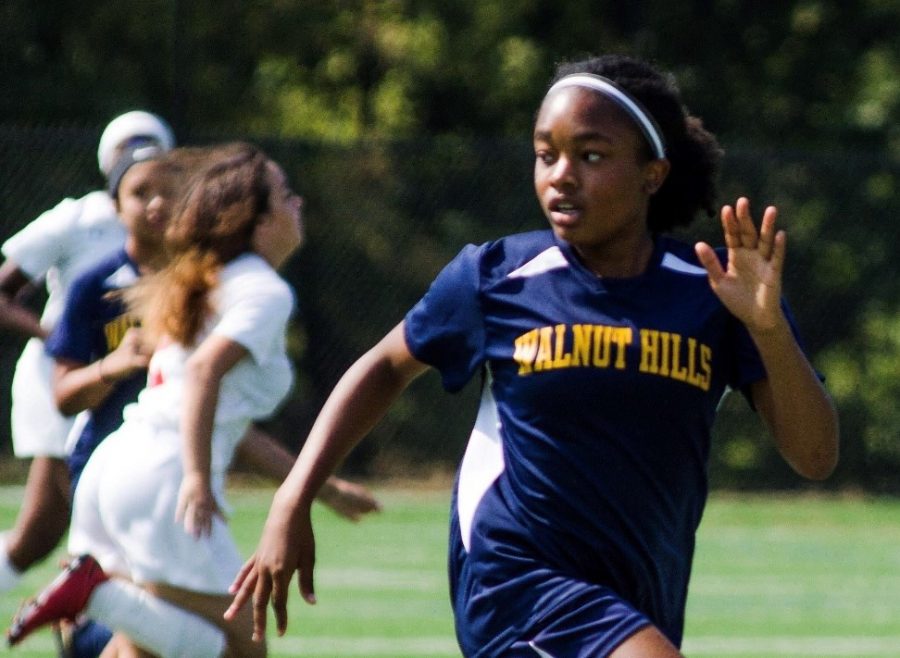 Jorja Wilkerson, '24, runs across the soccer field in an attempt to steal the ball from the opposing team. “I just love the teamwork and the adrenaline that I get before games. It’s definitely a sport you really have to focus on,” Wilkerson said.

Balancing academics and athletics can come with many stressful challenges, but it’s easier to handle when you have people behind you, supporting you all the way. Jorja Wilkerson, ‘24, knows what it’s like to deal with this stress, and was eventually able to find that perfect balance, with her friends, family and coaches on her side.
Wilkerson has been on the WHHS track team for the past two seasons and has been playing soccer since she was five. Wilkerson says both have a lot to offer but she prefers soccer because she’s “been able to bond more with it,” since “track is fairly new.”
In fact, the only reason she joined track in the first place was because of her father. “He doesn’t really believe in doing a sport year-round because that’s how people get a lot of their injuries, because they’re working the same muscles,” Wilkerson said. “ He and I talked about it and decided to see if I liked [track]. I ended up doing better than how I thought I would. So now I want to keep at it and see where I can go with it.”
Track is more of a leisure sport for Wilkerson, though she doesn’t love it any less. “I like how it’s just me. No one can just stop me from running. It’s more of a personal sport, and I can focus on myself rather than everyone around [me] and focus on the things I need to work on,” Wilkerson said.

But when it comes down to it, Wilkerson will pick soccer every time. “I just love the teamwork and the adrenaline that I get before games. It’s definitely a sport you really have to focus on, because one wrong move can cost your team a goal,” Wilkerson said. “I want to get to the point where I will know if I want to play in college, whereas track I haven’t really thought about it as much. It’s more to help me develop my endurance for soccer. And I would love to take soccer to college, but it’s not something I want to have to prove that I can do.”
Though both soccer and track are passions of Wilkerson, they both come with their challenges. “With soccer, it’s not like you can just sit down for six or seven months and then go out and play and it be the same. You kind of have to keep practicing and keep improving your skills, especially because I know there are other girls out there who are working like two or three hours a day on their soccer skills and they’re trying to take an open spot on the team or someone else’s spot of the team,” Wilkerson said.
Sports are competitive enough as it is, but, on top of that, Wilkerson says being a minority makes her feel like she has more to prove. “I kind of have to [stand] out a little more because there’s already a lot of stereotypes with girls and African Americans that play sports, so I have to keep that in my head whenever I go to a game. Like, I can’t really mess around. I can’t just go out there and give 50 percent. I have to go 100 percent every game because like my dad always says, ‘you never know who’s watching,’” Wilkerson said.

This is why one of Wilkerson’s biggest inspirations is U.S. women’s soccer player, Crystal Dunn. “I probably admire her because she’s just an amazing soccer player, and I love playing soccer, [and] because she’s one of the only African Americans on the U.S. women’s team. So being able to look up to someone who is not only a woman but someone of my race is really inspiring,” Wilkerson said.
Another one of Wilkerson’s inspirations is her old coach, Christo Lassiter, who had been her coach since third grade until he passed when Wilkerson was in sixth grade.
“[A good coach] is not afraid to be hard on you even if it’s not what you want to hear, but overall makes you a better player. [Coach Lassiter] yelled at us a lot, but being in that kind of environment allowed me to be stronger and play better. He definitely helped me become the person I am today,” Wilkerson said.
One thing she had to learn on her own, however, is how to balance it all. “Last year I didn’t really have it down well because there were times when I would want to focus mainly on athletics and I would get behind on my schoolwork. But now I think I have more of a balance,” Wilkerson said. “I’ve learned from my past mistakes and especially with freshman year next year and grades are actually going to count. I’ve learned to keep the school week for school and the weekends for the athletic stuff.”

But school work isn’t the only thing Wilkerson has been having a hard time balancing. With practice from six to seven hours a week and mountains of homework, it is sometimes hard for her to find time to spend time with friends and family.

“There are times, especially during soccer season, [when] my friends will want to hang out, but I have to tell them I can’t because I have practice or a game. So it’s been a bit of a struggle, but overall, they’ve been more supportive than I could have ever asked for,” Wilkerson said. “But I’ve also met some of my closest friends through soccer, and I’ve connected with a lot of people because of it, and they’re all friendships that I love and adore a lot.”
It’s the simple things, like support from her friends or encouraging words from her coaches and parents, that mean the most to Wilkerson. “I’m super thankful to have those kind of people in my life. Without them, I’d probably want to give up or quit when it’s hard. But I’ve learned to never give up. I remember my parents telling me that when I was younger I wanted to quit after my first game,” Wilkerson said. “But, I stuck with it, and if you have a good mindset, and confidence in yourself, people will see that and they’ll want to be confident and it’s a really positive effect that you can have on other people.”

Wherever Wilkerson plays, she considers her team a family and treasures the memories she has made with them. “I remember this one game from when I played for my old school, North Avondale Montessori. It was tied five to five with one minute left, and I remember dribbling down the field and I remember kicking the ball. Nothing went through my head, no one told me to, I just kicked this long shot and it went right over the goalie’s head and into the goal. All the parents went crazy and my old coach took off his shirt and it was just really funny. It just reminds me of how supportive my North Avondale Montessori soccer family was,” Wilkerson said.
No matter who she plays for or who she plays against, Wilkerson is ready and excited for the many challenges to come because she knows she’ll always have people cheering for her on and off the field.