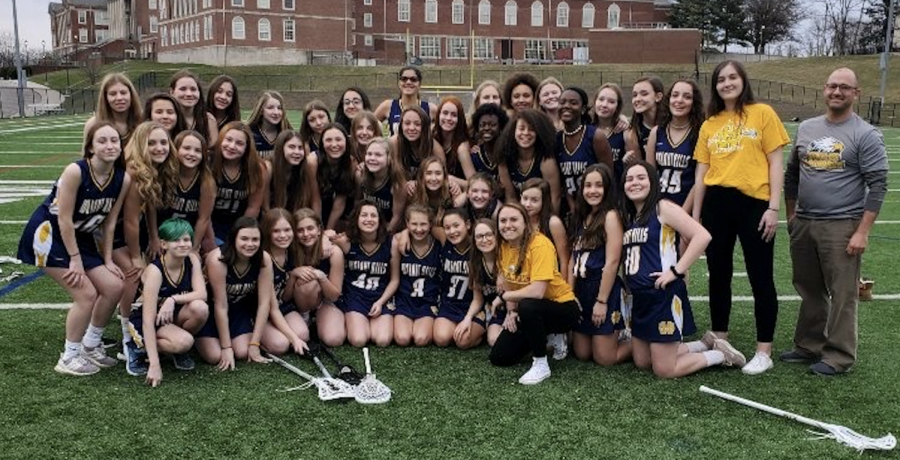 The WHHS junior high lacrosse team is beginning their season. With plans to push their limits and win, the team is ready to work hard.

Spring is almost here at WHHS, and it is a very busy time for the students. With new sports seasons beginning like track, baseball, softball, and of course, lacrosse, the students are preparing to have a great season.

The junior high girls have been getting ready for their upcoming lacrosse season both mentally and physically. Tryouts were the week of March 2 and those who made the team are beginning their practices.

Marie Flessa, ‘24, has been playing lacrosse for four years. Flessa started in fourth grade because her and her best friends all wanted to try a new sport.

Flessa went above and beyond to prepare and improve this season. “I definitely played a lot in my backyard, doing wall ball, and I also have a rebounder to practice with,” Flessa said.

Flessa also played in the off-season to maintain her hard work. “I also did a winter indoor league with people from junior high at WHHS. We played a game against another school’s team every Sunday,” Flessa said.

The players have great chemistry on the field but also get to take those friendships off the field. “My favorite thing about lacrosse is the bonds you make with people you wouldn’t have met outside of lacrosse,” Flessa said.

Flessa has hope and goals to better her mentality this season. “For this season I hope our team can really push ourselves past what we thought were our limits. We are going to be playing a few tough teams, and I want us all to help each other and be a strong team against them,” Flessa said.

Logan Symson, ‘24, has also been playing lacrosse for four years. “I started playing at sleepaway camp and loved it so I joined the team at home,” Symson said.

Just like Flessa, Symson has been training hard to be in good shape for the season. “I have been running and working out three times a week and getting outside with my stick on the weekends,” Symson said.

Symson loves the sport and everything she takes away from it. Symson not only learns how to be a better player but also works on stronger connections with the players. “My favorite thing about lacrosse is being able to make connections with friends that aren’t so close,” Symson said.

Symson is inspired by her friends to play the sport because of how they always push her to be above and beyond, on and off the field.

Sympson has set some goals to improve her mindset this season and will try her best to make sure those goals get accomplished. “Every team wants to be undefeated and with hard work I’m sure we can get there,” Symson said.

These girls are  strong players who know what they’re doing on the field. Along with skill, they can always improve with guidance from their coach. This year, the junior high girls are on the field with newly hired coach, Ashton Rock.

This is Rock’s first year coaching but she already has ways on how to push their girls to the limit while inspiring them. “I wanted to [coach] to influence young women to grow on and off the field,” Rock said.

Just like the players, Rock also has hopes for her first year as a coach at WHHS. “I hope to develop the lady lacrosse team through fundamentals of lacrosse, team building, and build a competitive side that they hold on to as they grow throughout their adult life,” Rock said.

With players and coach training and preparing, it is expected that they will all have a great season. To find out more information about the junior high lacrosse team, make sure to check out the WHHS website.