Reinventing perceptions of women in wrestling 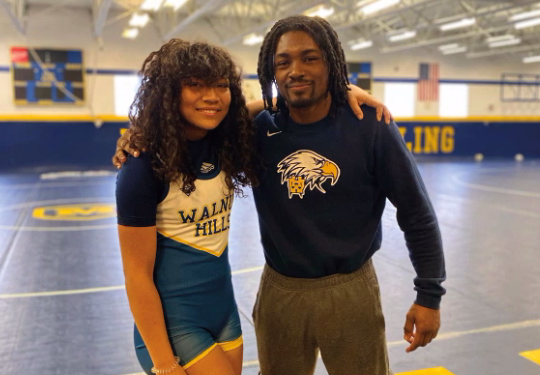 Typically when one thinks of girls’ sports at WHHS, many think soccer, volleyball, lacrosse or basketball, but very few will think of one of the heaviest contact sports: wrestling.
At WHHS, there isn’t a girls wrestling team, there’s only a junior high boys team and a high school boys team.

However, this never stopped Erin Martin, ‘22, and Hannah Lieb, ‘24. Both of them are part of the wrestling team and are out to prove that girls can wrestle too.

Very few girls throughout WHHS history have been part of the wrestling team and Lieb and Martin are two of the first.

“To me, being one of the only girls on the WHHS wrestling team means that I should help represent all girl wrestlers and do my best so that I don’t drag girls down and rather I lift them up,” Lieb said.

Lieb’s interest in martial arts started when she was in the first grade. She didn’t start out wrestling but rather training in the art of Brazilian Jiu-Jitsu. She continued with Jiu Jitsu until she came to WHHS and was interested to see if her previous martial arts skills would benefit her on the wrestling team.

“Of course I have had doubts, not necessarily because I am a girl, but a lot because I am still new to wrestling, but those doubts are what make me train hard everyday at practice,” Lieb said.

Lieb’s first season on the wrestling team was unfortunately cut short due to an injury that she developed outside of wrestling.

Lieb has been out of practice for a few weeks now and will unfortunately miss the end-of-season tournament.

Nothing has yet to stop Lieb from achieving her goals to become the best athlete that she can be in a widely male-dominated sport and this injury will not change that.

“When I wrestle, I don’t see myself different from any of the boys. Boys are naturally stronger than girls, putting me at a disadvantage, but I will never ever blame my losses on me being female. I hold myself to the same standard as everyone else,” Martin said.

Martin also plans to continue to wrestle throughout high school.

“I’m participating in the OAC Girls High School Championship on March 22 for wrestling. My coach wants me to wrestle year-round, which would attract a lot of attention from colleges. Women’s wrestling is a fast growing sport in college and right now I’m in a good position to get a scholarship,” Martin said.

The wrestling team will be taking part in the ECC championship match in the last weekend of February and hope to win and advance to regionals.

At the front of this fight will be two of WHHS’ fiercest competitors and strongest females, Erin Martin and Hannah Lieb.