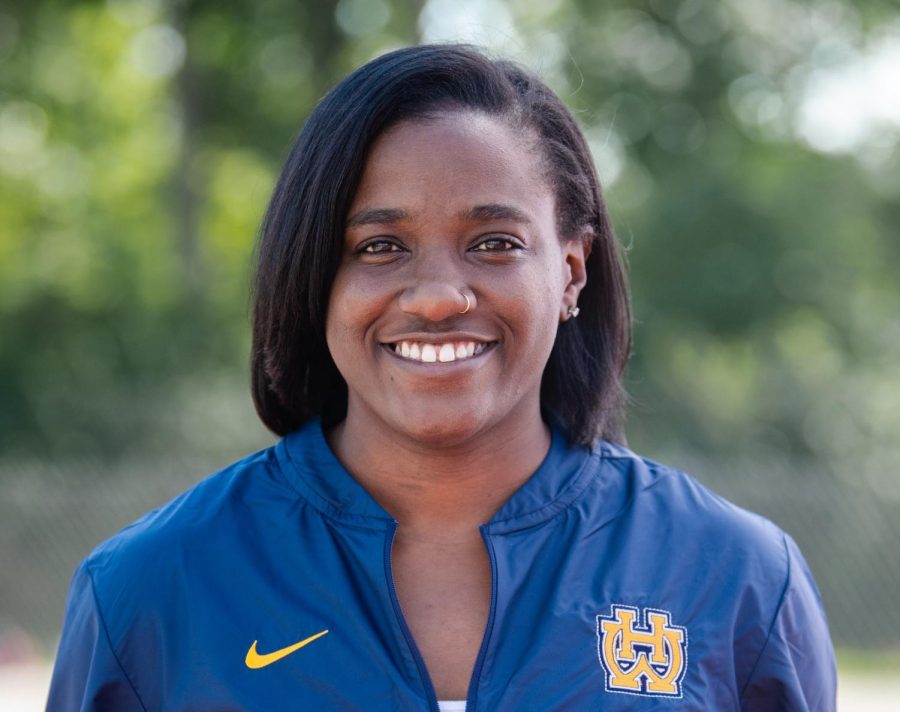 Shea Steele, ‘10, coaches WHHS' indoor track and field team. Once a part of the WHHS track team herself, Steele enjoys “being able to watch track meets and see kids succeed in a sport that I have been passionate about for the majority of my life."

Track and field is a competitive sport that takes the maximum training effort to succeed in the aspect of increasing speed.

The indoor track team’s current training schedule is three days per week: Mondays, Tuesdays and Thursdays, with a different aspect of training targeted each day.

On some days they will do a hard workout on the track focusing on increasing speed, and on other days they will focus on building muscle and gaining endurance with a slower-paced, longer run.

It is important to have a variety of workouts because although the ultimate goal is dropping times, recovery days are essential so the runner can gain speed without getting injured.

Every runner runs at their own pace so it is crucial for each individual to set goals specific to their own ability.

They frequently lift weights in the weight room with coach Kendal Fitzgerald as well, depending upon the seasonal weather conditions. The team plans to train outside as much as possible, but when conditions are worse in terms of temperature, wind or precipitation, they will relocate to inside WHHS and run on the third floor.

The team’s current training is designed to accomplish goals in cycles at a time.

With any sport, it is important to have team chemistry in order to succeed as a team. It allows one to have confidence and faith in their teammates and encourage each other to meet their goals.

Although it may not seem like team chemistry is a major factor of success in track and field due to its individuality, it has a big impact on the team’s overall passion for the sport.

“Overall team spirit is very important. Especially when you’re running your event and you want to hear that cheer from your team to keep going. Also, a little competition between teammates at practice gives us that push to work harder,” SENIOR  London Martin said.

Steele says that her favorite part of coaching is “Being able to watch track meets and see kids succeed in a sport that I have been passionate about for the majority of my life.”

Steele, herself, ran track for Mt. Healthy starting in the seventh grade. She “had always competed against WHHS and admired the teams’ vibe and overall success.” She came to WHHS as a freshman and joined the track team knowing, “that vibe and success was something that [she] wanted to be a part of.”

The team strives to increase their team chemistry throughout the indoor season to have a good base for teamwork in outdoor and preserve the pride and success that has always been in the presence of WHHS.

Track and field as a sport may not seem that complex on the surface, however, there are a multitude of events and distances to participate in that a training approach is different for every athlete. Therefore each athlete must set goals for themselves in order to improve in their event.

Distance, for example, is very different from sprinting.  Distance runners have to practice improving their endurance, whereas sprinters may focus on lengthening their stride and keeping good form.

“I like running these events because they push myself,” Martin said, “The 400 meter is one of the hardest, everyone thinks you can jog it but in reality, a 400m is a whole sprint plus endurance.”  His goals for the season consist of training hard in and out of practice and acting as a role model for younger teammates.

Overall, the team as a whole has the intention of having fun this indoor track season, as well as forming a good base for the outdoor season.  They plan to train hard and improve in all aspects of the sport in order to succeed in the spring.