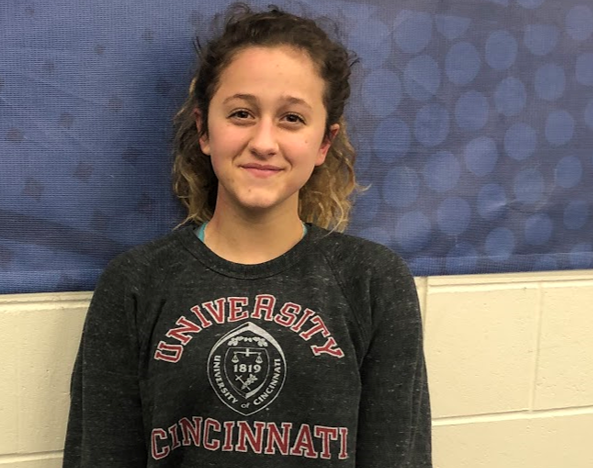 Hannah Lieb, ‘24, is a part of WHHS' junior high wrestling team. As a girl in the male-dominated sport, she works hard to win. “The phrase ‘fight like a girl’ implies that girls can’t fight as well as boys, and it’s the best feeling in the world anytime I win a match and prove that phrase to be wrong,” Lieb said.

What is the first sport you can think of? Out of the 60 WHHS junior high students surveyed, only two students answered wrestling. Hannah Lieb, ‘24, wants to change that.

In the first grade, Lieb discovered her love for Brazilian Jiu Jitsu. She participated in this martial art for six years until coming to WHHS this year and developing an interest in wrestling.

“A lot of people will tell you that wrestling isn’t a team sport,” Lieb said. “When you wrestle in a tournament you wrestle individually, but you are still part of something bigger. And wrestling isn’t very publicized so we don’t get a lot of recognition, but it’s probably one of the hardest sports out there.”

Though there is not a lot of recognition in the sport, being a notable minority, such as a girl, seems to catch the eyes of the crowds.

“It’s a lot easier for a girl to get noticed when wrestling, and by no means am I saying that’s easy, but it’s not very common for a girl to be playing this sport and people find it interesting to see,” Lieb said. “The phrase ‘fight like a girl’ implies that girls can’t fight as well as boys, and it’s the best feeling in the world anytime I win a match and prove that phrase to be wrong.”

Lieb says being one of the only girls on the team is hard at times, but ultimately has it’s advantages. “It’s funny because sometimes people are scared to touch me like they’re doing something wrong; like they don’t want to hurt me. I’ve even had people refuse to fight me before. They want to make sure I’m comfortable.”

But the physical aspect of wrestling isn’t the only thing that sparked Lieb’s interest in the sport. “I really like the social part of wrestling. Everyone’s so nice and welcoming, even though I’m a girl,” Lieb said. This is Lieb’s first year at WHHS and, thanks to wrestling, she was able to make friends quickly. “I’m really good friends with a guy named Connor who I probably wouldn’t have talked to if not for wrestling,” Lieb said, “The camaraderie is so strong and it’s really one of the most amazing feelings to be a part of something so great.”

Lieb is ready and excited for her first year on the WHHS Junior High Wrestling team and is looking forward to the years, friendships and experiences to come.