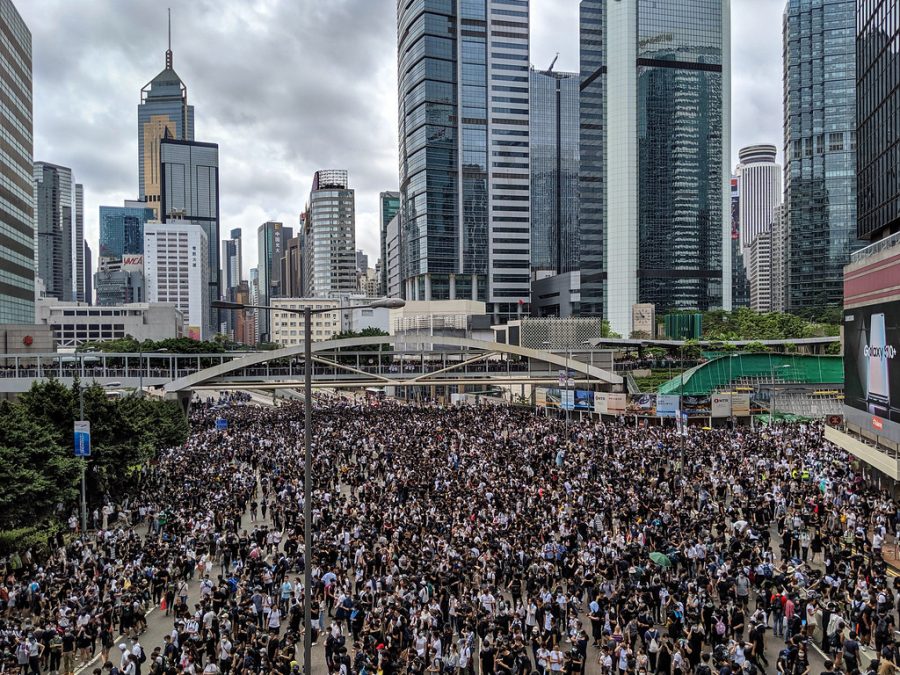 Hong Kong protesters take to the streets in opposition of the extradition bill. People have been protesting the bill since March.

On Oct. 4, 2019, Houston Rockets general manager Daryl Morey tweeted an image that read, “Fight for Freedom. Stand with Hong Kong.” Over the next few days, Morey deleted the tweet, he and the NBA issued an apology to China and the Chinese Basketball Association suspended ties with the Rockets. Since then, both Lebron James and Shaquille O’Neal have spoken out on the Hong Kong issue, and Congress passed the Hong Kong Human Rights and Democracy Act of 2019.

The American fervor over Hong Kong seems to have been ignited with Morey’s tweet. The NBA’s swift reaction has raised questions about the league suppressing freedom of speech among both players and coaches. The controversy has left many confused as to why the NBA was so quick to condemn Morey for sticking up for Hong Kong. This confusion is worsened by the fact that the situation in Hong Kong isn’t clear to many Americans. Many have been left wondering what exactly is happening in Hong Kong.

Hong Kong operates outside of mainland China’s jurisdiction. Controlled as a British colony until 1997, the small administrative region was given back to China under an agreement of “one country, two systems.” Since then, Hong Kong has operated under a democratic system with far more freedoms than the communist Chinese government allows for its people. China and England’s agreement stated that by 2047, the region would become fully integrated into the mainland.

Many citizens of Hong Kong fear that China will try to take back their city before 2047. They believe China has slowly been encroaching on Hong Kong and exerting more and more influence over the territory. To many, their fears were realized when Hong Kong introduced a new bill on April 3, 2019.

This bill would allow for the extradition of Hong Kong citizens to other countries for legal processing and arrest. It was immediately met with criticism aimed at the ability it gives China to potentially arrest anyone in Hong Kong who speaks out against them. The bill was seen as a way for China to legally quiet those who do not support their government. And with many seats in Hong Kong’s legislature filled with pro-China lawmakers, the bill was set to pass.

Two months later, on June 9, an estimated 1 million protesters took to the streets. They marched to the government headquarters with chants and signs urging Hong Kong to withdraw the bill. The protesters’ goal was to be peaceful. They wanted their voices to be heard. Three days later, another march took place. This time, the Hong Kong police stepped in, using tear gas and riot control rounds in an attempt to quell the demonstrations. The violence only added fuel to the fire.

On June 15, Hong Kong’s leader Carrie Lam announced that the bill had been suspended. But the protesters would take nothing less than a formal withdrawal. They took to the streets many times over the next two months, surrounding police headquarters, storming the city’s legislative building, and stopping flights by gathering at the airport. The police continued to confront the protesters with riot stopping measures. The protesters have not remained peaceful, firing back with rocks and petrol bombs. At the airport protest, a man suspected of being an undercover officer was horribly beaten by the protesters. He was later identified as an undercover journalist.

As the violence increased, the protesters’ list of demands grew. Their movement became more than just a desire to withdraw a bill. They’re now speaking out against Chinese control and urging more democratic freedoms be granted in Hong Kong. The movement has generally centered on five demands: an end to the use of “riot” to describe the protests, amnesty for protesters taken into custody, universal suffrage in executive and legislative elections, an investigation into police brutality, and the withdrawal of the bill.

Their fifth demand was met on Sept. 4 when Lam announced the bill would be withdrawn, but the protests have not stopped. They have stated that until all their demands are met, they will not stop.

The protests have drawn people from every demographic in Hong Kong. Lawyers and politicians have joined hundreds of thousands of young people in the fight against Chinese influence. The support has not been steadfast, though. The movement’s increasing use of violence and vandalism has turned some former participants away.

The true unknown at this point is China itself. Although warnings have been issued and attempts have been made to silence the movement in the mainland, the communist government has not directly interfered yet. The international response has been mixed, with many American politicians, including Vice President Pence, voicing their support for the movement. Others have stayed silent. China’s immense financial influence and strong global ties have kept foreign governments largely out of the fray. Supporting Hong Kong would mean becoming China’s enemy. When the NBA silenced Morey, it wasn’t condemning Hong Kong. It was fearful of what China would do in response.

The protests will soon reach their twenty-second weekend, and they show no sign of slowing down, and neither do the police. Violent clashes are now regular, and the hope of a peaceful resolution has significantly diminished. The government has not budged on any of the movement’s demands since the bill’s withdrawal. The marches continue to grow. Hong Kong’s future is unclear.