An open letter to the Ohio Senate

A plea for the abolishment of Ohio's "tampon tax" 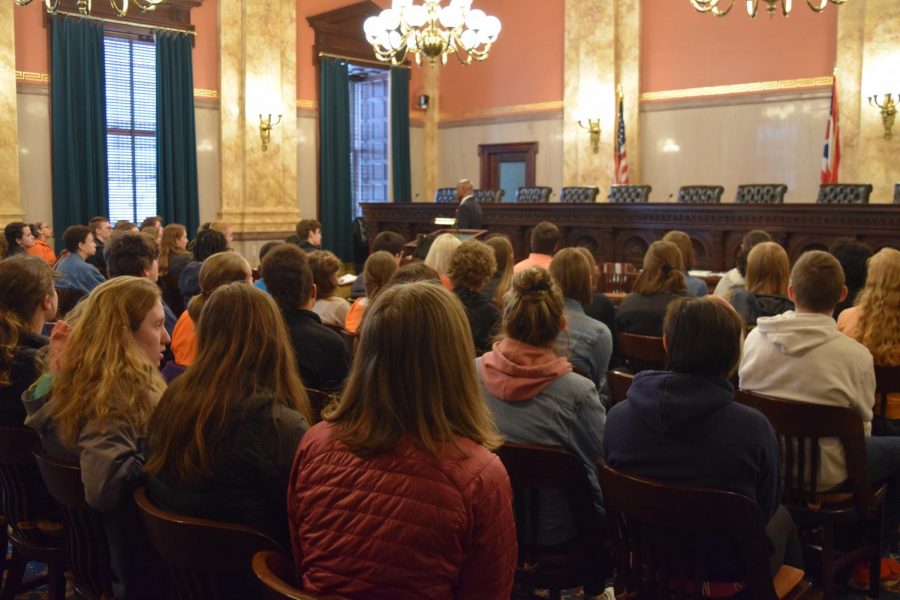 In March of 2018, WHHS students sit in the Ohio Statehouse, where the Ohio legislature meets, lobbying the state government to take action on gun control. Like these students, Nadya Ellerhorst, '20, has been working for change, but on a different issue; in the past year, she has written to and petitioned for the Ohio Senate to reform their "tampon tax."

Anyhow, there’s a bill that recently got passed by the Ohio House that addresses the “tampon tax.” You received a similar bill in December, but maybe you got caught up in the holidays or something because it never came to a vote.

I really don’t feel like re-defining the term “tampon tax” (check out my previous piece if you need a refresher), but as a person who menstruates, I can tell you first-hand that it’s incredibly discriminatory. Think about it: it targets people based on their biology. You can’t control menstruation, nor can you control whether or not you’ll be born a menstruator.

I’m usually a pretty patient person, but I’ve been waiting for the state tampon tax to be abolished for about 11 months now, and so has every other menstruator in Ohio. I can’t speak to their own patience levels, but I’m sure that a few are getting pretty fidgety.

I get it, you’re busy, but it’s sort of impolite to keep me, let alone plenty of others, waiting.

Come on now. You were raised better than that. You’re 216 years old, for Pete’s sake.

The menstruators of my county currently pay an additional 7 percent on tampons, pads, menstrual cups, and the like. Yes, 7 percent is barely a tenth, but consider how it affects menstruators in poverty, with families to feed. They may struggle to find that few extra cents, let alone find enough money to make ends meet. Maybe they can’t even afford these products, forcing them to use unsanitary, dangerous alternatives.

But lo and behold! You, yes you, have the chance to cut down that tax by 5.75 percent, meaning the menstruators of my county will only pay the 1.25 percent local tax on products integral to daily function (not saying that I still like that 1.25 percent, but it’s still an improvement). I haven’t gotten around to memorizing the tax rates of every other county in Ohio, but I’m quite positive there’s a chance that other Ohioans may get an even larger tax break.

If you pass this bill, I can guarantee that a lot of good things will accompany it. First, it’ll be an economic relief for everyone who menstruates, especially those in poverty.

Second, being the sixteenth state to abolish a state-wide tax on menstrual products, we may inspire other states to follow us. We’re the state that gave the world light bulbs, Pringles, and Steven Spielberg. Imagine being yet another in a growing list of states to give the world something even MORE amazing: inspiration to fight for economic and menstrual justice!

Third, in a broader sense, you’ll be contributing to the ever-growing movement for equality in America. Although some men and nonbinary people menstruate, when talking about female menstruators specifically, who still don’t earn equal pay and who are charged more for other everyday items as a result of the “pink tax,” the abolishment of the tampon tax will prove to be not only an economic relief, but a clear sign that their government seeks to dissolve discrimination against them. And when speaking about all menstruators, the abolishment of that abhorrent tax will send a message that taxes on a person’s biology are legally wrong.

All it takes is a simple majority vote (and the signature of our governor, but we’ll cross that bridge when we get to it). It’s clear that the Ohio House likes it, seeing as the bill passed 90-0. However, I’m not asking for unanimity here, just a majority.

But if a unanimous vote occurs, you won’t see me complaining.

P.S. Give my best to the House. They should be proud.