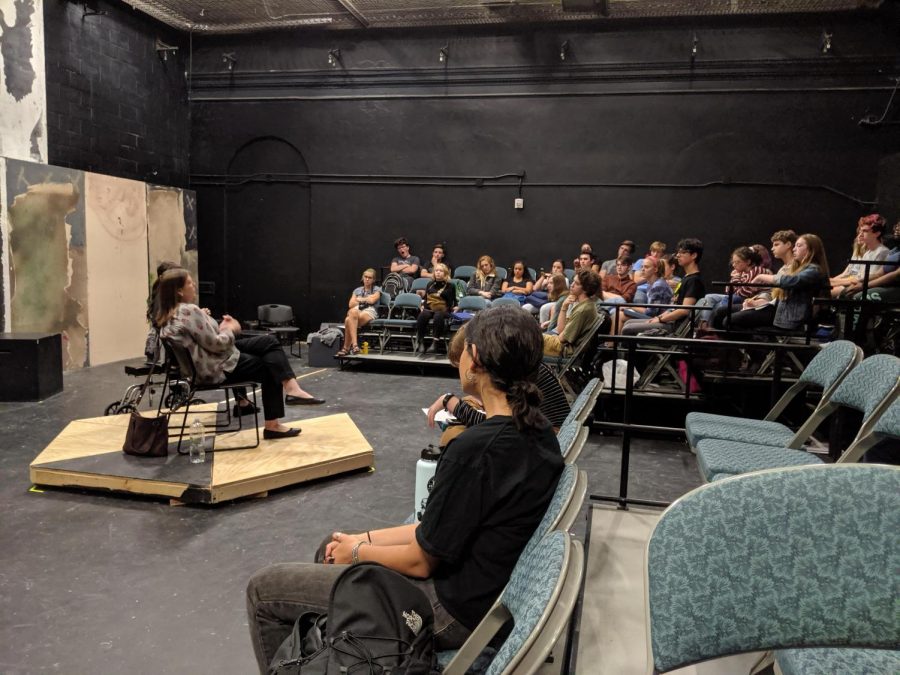 Speakers Lauren Carr and Dr. Jennifer Smith discuss misconceptions about autism and explain the need for inclusion both on and off the stage. The WHHS Theatre Department’s upcoming play, The Curious Incident of the Dog in the Night-Time, features a main character on the autism spectrum.

“If you’ve met one person with autism, you’ve met one person with autism,” Lauren Carr says as the cast of WHHS’ upcoming production of The Curious Incident of the Dog in the Night-Time listen intently. On Sept. 25, sitting amongst the minimalistic set in the Black Box Theatre, Carr and fellow speaker Dr. Jennifer Smith dispelled notions of autism and illustrated the need for acceptance towards the community of those with disabilities.

Although they work in different sectors, Carr and Smith often come into contact with people with autism. Carr is the Director of Education, Engagement and Inclusion at Ensemble Theatre Cincinnati, where she works with drama students with autism. Smith is the director of Cincinnati Children’s Hospital Leadership Education in Neurodevelopmental Disabilities Program.

WHHS’ upcoming production of The Curious Incident details the experiences of Christopher Boone as he tries to discover the culprit of the grisly murder of his neighbor’s treasured canine. Boone is on the autism spectrum, and while this isn’t necessarily the focus of the show, it affects how he perceives the world and how the world perceives him.

Carr and Smith emphasized the overall need to see the human beyond the disability. “We are in this incredible time of self-identification,” Carr said. She personally doesn’t refer to her students’ autism unless they self-identify in that manner. To illustrate the deeper importance of this choice, Smith pointed out that you wouldn’t refer to someone as “that ‘cancer kid.’”

Both expressed their excitement about how the next generation will view those with autism and other disabilities, denoting it as “the ADA [Americans with Disabilities Act] generation.” While previous generations viewed Rain Man as the defining example of autism, Carr and Smith emphasized the current need to see autism as a spectrum; no two cases are exactly alike, and they can vary in the degree of their extremity and symptoms.

Carr and Smith illustrated that, although increasing disability awareness may be slow, it’s taking center stage in the theatre world. In a 2017 production of The Curious Incident, Christopher was played by Mickey Rowe, the first actor with autism to portray the character. Such theatrical headway was also recently seen with Ali Stroker, the first Tony recipient that uses a wheelchair. Additionally, the recent release of the film The Peanut Butter Falcon, whose main character is portrayed by an actor with Down syndrome, nods to the trend within Hollywood of having characters with certain disabilities played by actors who actually have them.

Similar progress is being made in the WHHS theatre community in terms of making theatre more accessible, with the possibility of one of the show’s dress rehearsals being a sensory-friendly production. “Sensory-friendly” means less light and sound effects, but it doesn’t mean that the show’s main message will be toned down. Although such plans are not finalized, director Michael Sherman wants to give audience members the chance to “be able to see themselves on stage.”

In terms of how the show addresses autism, Smith hopes that it helps audiences “move beyond awareness” into the realm of “inclusion and acceptance.” Similarly, Carr thinks the show will “put up that mirror to society,” and personally deemed it “an opportunity to bring this subject [autism] to the table in a really lovely way.”