Feet on the ball, eyes on the future 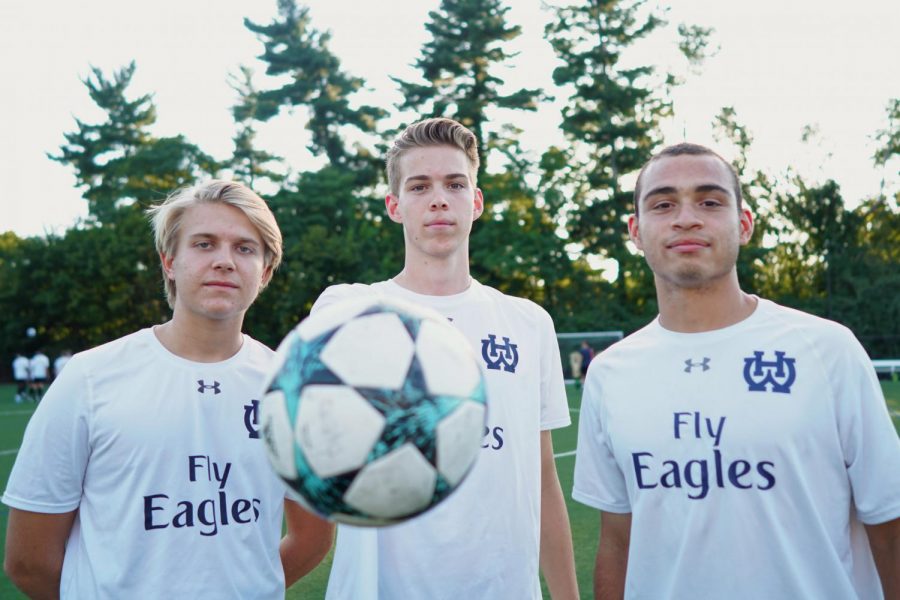 From left to right: SENIORS Spencer Shroyer, Elliot Hull, and Caleb Price, the varsity soccer captains. These student athletes are not only committed on the field but also to college.

Senior year comes with a lot of ‘lasts’. Last first day, last school dance , the last few months with the people you’ve been going to school with for the past six years. For athletes, there’s another list of lasts. Last first game, last practices and for many the last time playing the sport that they’ve spent countless hours training for.
That’s part of what makes playing sports in college so appealing to many high school athletes; a chance to continue playing the game that they love.
This holds especially true for the captains of the WHHS men’s soccer team. SENIORS Caleb Price and Elliot Hull have been on varsity for four years and Spencer Shroyer has been on the team for two years. Shroyer and Hull have both committed to furthering their academic and athletic careers. Hull plans to attend Lake Forest College, a DIII liberal arts school outside of Chicago. Hull credits his parents for helping him visit the many schools he fielded offers from before committing and his coaches for helping him become the player he wanted to be. He looks forward to the new competition as well as becoming a part of a new team.
Shroyer committed to The University of Indianapolis in July, a DII college in Indiana. Shroyer had been interested in the school for some time. “UIndy was always at the top of my list, there were some other schools I was contemplating [like] West Virginia University, but UIndy was always my first or second choice,” Shroyer said. Shroyer was also very proud of being selected to play for the U.S. Youth Futsal Team, which he credits as a huge help in getting him exposure in the recruitment process.
Both Captains proclaimed their commitments as one of their biggest soccer achievements.

“My biggest accomplishment has probably been my commitment because it has been the culmination of a lot of hard work and the realization of one of my biggest goals,” Hull said, who views his commitment as a reward for all the work he’s put in over the years.
Price has yet to commit but has offers from Florida Southern, the College of Wooster, University of Mount Union, and the Air Force academy. He has plans to announce his final choice before the end of the month. Price has wanted to play in college ever since he began playing the sport. For now, Price looks forward to making his last season in high school the best one yet.
Like his fellow captains, Price credits his club coach especially in helping him choose the right school. As far as club soccer, Price’s team has qualified for the National League, which is a made of 16 high school teams as well as being named ECC all conference. Price credits being apart of this league as one of his biggest accomplishments as it has allowed him to play in by cities such as Las Vegas and Orlando.
The recruitment process isn’t easy. Once an athlete decides they want to play in college, they are faced with a lengthy to-do list: Sending countless emails to coaches, making visits to many colleges, as well as making sure that you’re still playing at your best. Although the recruitment process requires a lot of dedication and patience, as the three captains stressed, it’s still something many soccer players aspire to do. “For anyone that wants to play in college but is scared of the recruiting process, don’t be. The coaches are very nice and receptive. The process is more straightforward than a lot of people make it out to be,” Hull said.