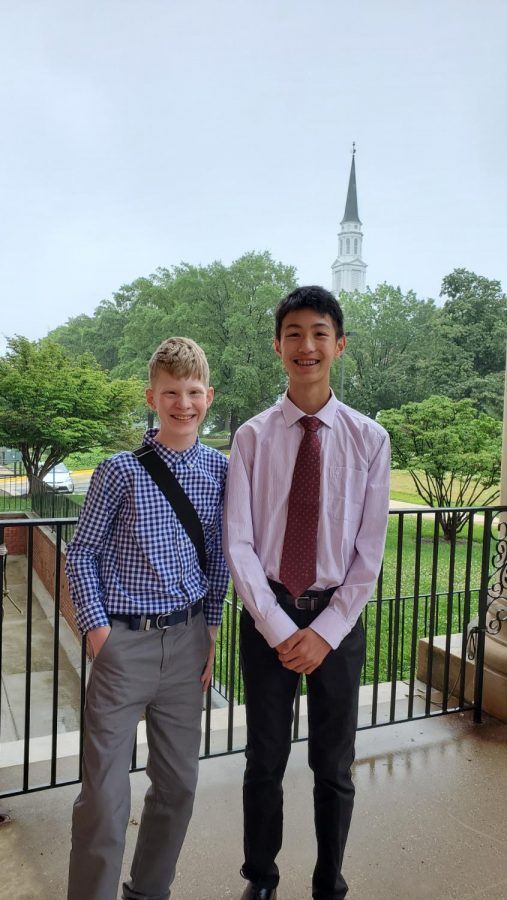 Eli Johnson and Louis Ke made up the team that made it to nationals at National History Day.

Many students who attended WHHS for their eighth grade year fondly remember having to do their National History Day (NHD) project.

Tasked with choosing a historical topic, researching it as much as they can, and connecting it all back to the contest’s yearly theme, students get a chance to be creative and explore their own interests.

The project has become a mainstay of U.S. history classes at WHHS, especially in honors’ bells. While some students are content with simply getting it done just to get it done, others commit to their assignment. They go above and beyond to make their paper, presentation, or website something they can be proud of.

Once WHHS’s National History Day ends, students have the choice to continue on to regionals. Most participants, even the ones with the best projects, choose not to. However, over the summer, two students chose to take their project further.

Louis Ke, ‘23, and Eli Johnson, ‘23, ended up taking their project all the way to nationals, winning seventh place in their category.

“My project just wasn’t working out,” Ke said. Between soccer practice and violin rehearsals, Ke was struggling with finding a way to make his NHD project something special. “Eventually I realized Eli had a really good idea, so I asked if he wanted a partner.”

Johnson and Ke have been good friends since kindergarten, so it only made sense that they would eventually team up, the two explained.

Johnson had already connected 2019’s theme,Triumph and Tragedy, with one of his personal favorite historical figures: Alexander Hamilton. He knew the basics of Hamilton’s story from seeing the revolutionary Broadway musical about his life three times (his favorite song is “Right Hand Man”).

From there, Johnson began his own research, even reading a majority of Hamilton’s Federalist Papers, which is an achievement worth its own article. They agreed that things really started to come together once they started working as partners.

“We probably worked for over 50 hours on our project, even more if you count all the hours we spent FaceTiming and talking,” Johnson said.

They chose to put their project together as a website, complete with all the information you could ever want about America’s first treasury secretary.  They made sure to detail how he affected history and how he fits into the theme. When the time came to present all their hard work to the school in January, the duo earned a great grade. But they did not feel finished.

“We did so much work on this project, we thought, ‘Why not go far with it?’“ Ke said. They were regional bound.

“Any student who wants can advance to regionals. I’m glad Louis and Eli decided to go for it,” Mitch Perdrix, the pair’s history teacher, said. “They were the first group in a while to continue on with their project.”

Perdrix made it clear that Johnson and Ke’s achievement was mostly independent; after he helped them register for regionals, they were on their own. He also pointed out that many of their competitors come from schools where NHD is almost the entire history curriculum.

“Students from those schools work all year long on their projects, with teachers guiding them the whole way, while at Walnut it is more independent,” Perdrix said. While this may have been discouraging for some, Ke and Johnson weren’t going to throw away their shot that easily.

At regionals, the duo competed against over 1000 other students from the area. “Regionals were the hardest,” Johnson said, “because we had to memorize our whole project. The judges hadn’t seen it beforehand, so we had to go over the whole thing when we presented.”

“It was also in this dimly lit, old classroom, so that didn’t help,” Ke added. Despite their nerves, the presentation went well. Only the top two or three projects in each category get to advance to the next level. With that said, the two were selected to go to state.

Ke noted that the conditions for state in Columbus were better. This time, they were interviewed and had to go over the special points of their presentation. The judges were impressed by how deeply they had researched Hamilton.

Again, only the top two or three groups move on, and again, they advanced. The national competition took place from June 9-13 at the University of Maryland.

“We only stayed one day, because we were kind of busy the rest of the week. Our category [junior website] was also the very first to go,” Ke said. The judging process was similar to state, except they had to wait outside the room for almost an hour before presenting. “That was the most nerve racking part of the whole experience, just waiting,” Johnson said.

“We were nervous at the beginning, but once we got into our groove, it was easy from then on,” Ke said. Their hard work paid off; the website ran smoothly, and they didn’t miss a beat of their presentation.

They both enjoyed the experience in Maryland, and returned home at the end of the day. They would have to watch the end-of-the-week awards ceremony at home.

Besides placing seventh in the country in their category, Ke and Johnson were also gifted the U.S. Constitution Award. This is given to the best project that is connected with the Constitution – it also comes with a respectable cash prize.

“We aren’t huge history buffs, really. At first it was tons of work. I learned a lot about how to make a real research project. And all that effort went into building our own thing, which we then got to share with others. That was the fun part,” Ke said. Johnson agreed.